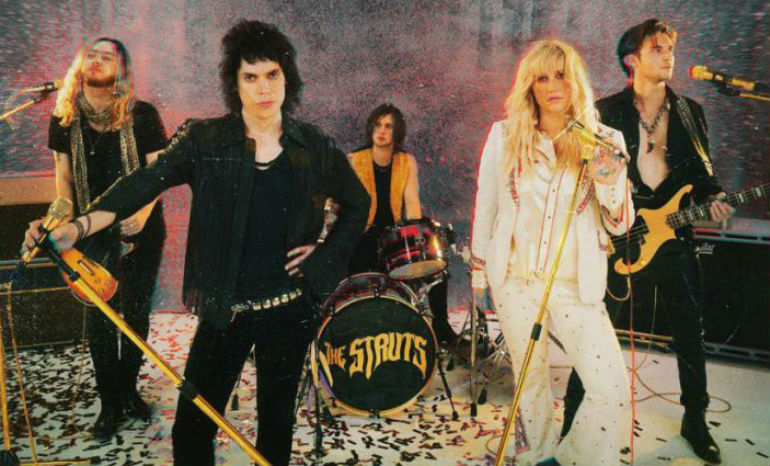 Kesha has teamed up with The Struts for their song “Body Talks,” which is a fun rock-pop track that we just can’t help but get down with! “Body Talks” is very catchy, and it’s reminiscent of Kesha’s earlier music, which is something we’ve missed from the singer. It’s got all the bop and bite of “Tik Tok” and “Cannibal” combined, making it the perfect pop-rock fusion song. The Struts and Kesha’s sound come together seamlessly, sort of like they’ve making music together from the beginning.

Kesha is a featured artist the track, adding to her long list of featured credentials. Before Kesha’s comeback in 2017, she was featured in many pop hits such as Pitbull‘s “Timber” and Flo Rida‘s “Right Round” way back in 2009.

In the music video for “Body Talks,” Kesha and Lead singer of The Struts, Luke Spiller, jump around in their rockstars’ finest as they sing and dance. The video is a red and gold monochromatic fun house with glitter-covered bananas and a gold megaphone. Kesha is giving us major Elvis vibes in a white and red leather rhinestone suit, whereas Luke has nailed the Mick Jagger Swagger with his black shaggy hair and striped skinny pants. This music video is a fun ride that is an absolute must see. Check out the video below and see for yourself!