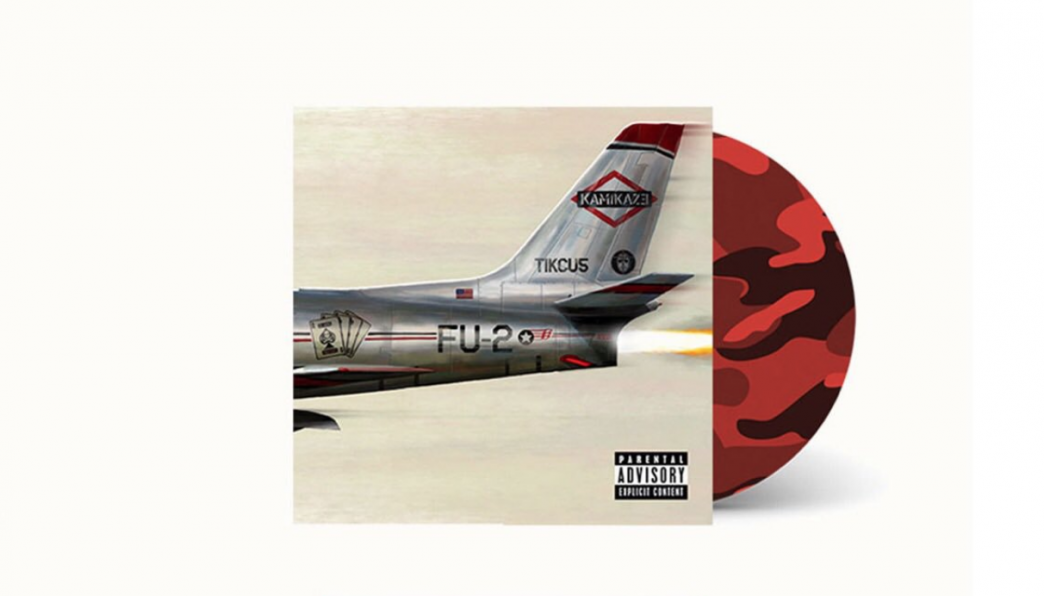 On a day that Eminem was expected to release his single, “Venom”, for the upcoming Marvel motion picture, Marshall Mathers surprised us all with an entire album. Kamikaze is the tenth studio album the rapper has released, and his second in eight months.

After receiving mixed reviews for his Revival album, Eminem responded with one of his best pieces of work yet. His word play, lyricism, flow, and content were absolutely golden for the 45-year old Eminem. It also featured a huge amount of attacks from Mathers, there’s even an article pointing out all the disses and who the targets were.

In the opening track, “The Ringer,” Eminem continues his ongoing slaughter of President Donald Trump. Eminem has been very critical of the Commander-in-Chief, with multiple songs attacking him and criticizing his time in office. Mathers also released a freestyle at the BET Hip-Hop Awards last year, where he ultimately told his fans they need to pick a side, Eminem or Trump.

He rapped “And any fan of mine / who’s a supporter of his / I’m drawing in the sand a line / you’re either for or against,” and then promptly flipped the middle finger to the camera. However, Eminem backtracked on that statement, admitting that “if I could go back, I’d at least reword it and say I empathize with the people this evil serpent sold the dream to that he’s deserted.”

The rapper also disses many other rappers, including Machine Gun Kelly, Tyler, The Creator, and even his “Forever” collaborators Kanye West, Lil Wayne, and Drake. He continues his attack on mumble rap and the new wave of rappers, most notably attacking Lil Xan and Lil Pump, saying, “Lil Pump, Lil Xan imitate Lil Wayne / I should aim at everybody in the game, pick a name / I’m fed up with being humble / And rumor is I’m hungry / I’m sure you heard bumblings / I heard you wanna rumble like an empty stomach /I  heard your mumbling but it’s jumbled in mumbo-jumbo”.

Overall, Eminem’s tenth album was exceptionally well done. He still has the tools that made him famous, but his subject matter did lack on Kamikaze. It was honest, but it just seems like Mathers doesn’t have much to rap about anymore. The Marshall Mathers LP II was essentially 17 tracks of him spitting his best rhymes, but the content matter itself was nothing to inspire. Nonetheless, his flow, wordplay, and disses remain amongst the best in the game today.

While his old works such as The Marshall Mathers LP and the more recent Recovery will be hard for him to top, Eminem once again proved he is one of the best in the lyric game today, and continues to cement his legacy on the Mt. Rushmore of rap right alongside Tupac, Jay Z, and the Notorious B.I.G.

What do you think of the album? Let us know in the comments or by tweeting us @Soundigest!