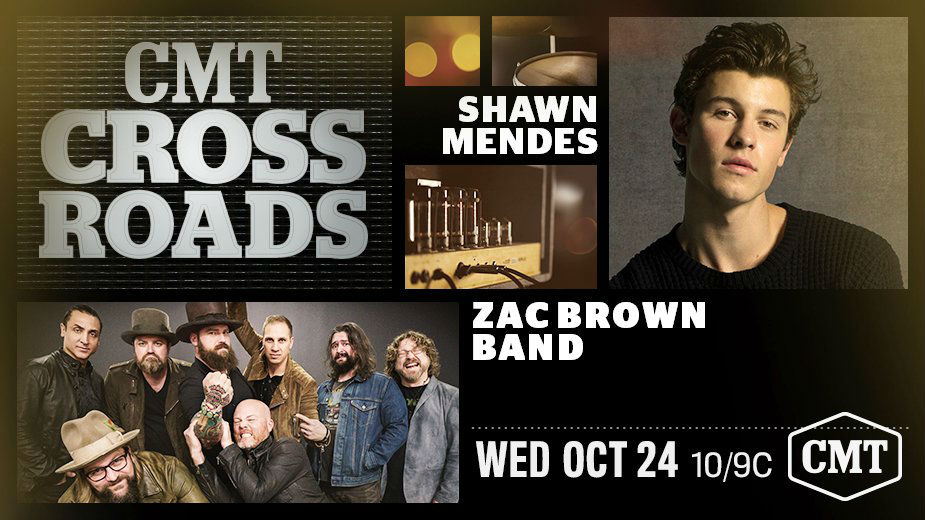 This October, there will be no tricks, just treats for fans of country and pop music alike. CMT recently announced that Shawn Mendes and Zac Brown Band will collaborate for the first time ever on an upcoming episode of the wildly popular CMT music series Crossroads.  The show tapes outside of Nashville, and will air on October 24.

Zac Brown Band is no stranger to covers. Their current tour, Down The Rabbit Hole, showcases a set list comprised of almost half cover songs. The band enjoys stretching their talents and celebrating all of their musical influencers.  Of the upcoming collaboration with Shawn Mendes, Zac Brown says “…this Crossroads will be very special with huge vocals and musicality. It will be unexpected and something that both sets of fans will enjoy.”

Shawn Mendes has been quite busy lately between performing his hit single “In My Blood” at the 2018 VMA’s, gracing the cover of Variety magazine and preparing for a new worldwide tour. Shawn Mendes: The Tour launches in March 2019, with over 60 dates across Europe, North America and Australia.

While Shawn Mendes is known for his R&B-style pop songs, country is a brand new genre for him. “I’m so excited to head to Nashville to play with Zac and the band on Crossroads,” Mendes said. “It’s going to be a blast.”

CMT’s Crossroads has delighted viewers and fans since its 2002 debut.  The show pairs country artists with musicians from other genres. Both artists cover one another’s biggest hit songs. Past performance mash ups such as Alicia Keys and Maren Morris, Stevie Nicks and Lady Antebellum, Def Leppard and Taylor Swift, and Bon Jovi and Sugarland.

Comment below to let us know which songs you hope Shawn Mendes and Zac Brown Band collaborate on, and don’t forget to une in to catch the sure-to-please one hour special performance on CMT Wednesday, Oct. 24 at 10 p.m. ET.