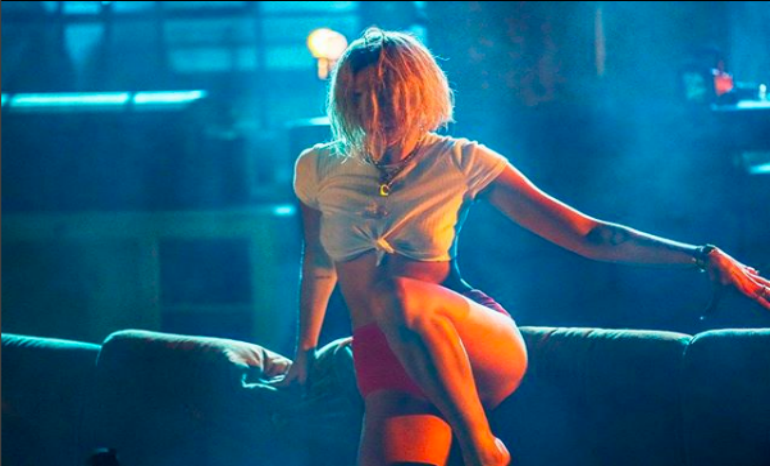 Dua Lipa isn’t slowing down any time soon. Since having been named Spotify’s most streamed female artist of 2017, the British singer has collaborated with Calvin Harris on the chart topping single, “One Kiss,” and announced the October 19th release of a deluxe version of her self-titled debut album.

“Electricity,” one of the three new additions to Lipa’s deluxe album, was released last Thursday. The single is a collaboration with power duo, Silk City (Diplo and Mark Ronson) and is also co-written by Diana Gordon, who worked on Beyonce’s Lemonade, and Romy Madely- Croft of The xx. The piano-driven, house-flavored jam is just as hot and exhilarating as you might think and is accompanied by an equally thrilling music video.

The video opens with amateur home-video style footage from the 2003 New York City Summer Blackout, and then pans to Lipa, sweating in her dark NYC loft and listening to the radio.  As she begins to dance and sing about the electric feeling of being in love, the lights in her apartment– and there are many– illuminate and intensify. The Flashdance-inspired solo choreography escalates into a steamy dance party as New York City locals are drawn to the flickering lights and energy coming from inside her apartment. The dancing becomes so passionate that it generates… you guessed it, electricity. Diplo and Ronson themselves get stuck in a freight elevator trying to get to the party, adding a comedic element to the video and tying the collaboration together.

The message and vibe of this video is refreshing, as it shows Lipa trying on a new skin and is a departure from mainstream pop videos of late. “Electricity” showcases an out-of-control and liberated side of Lipa, who is often critiqued for her subdued and over-polished performances. Her radiating confidence and pride in her sensuality draws us in and allows us to see more of what she’s about than in some of her previous music videos. Lipa also commented on how working on this music video affected her as an artist:

If this is the future of Dua Lipa’s music and videos, we’re all for it. This burst of energy is just what we needed to see as Lipa continues down her path to stardom. You can now stream and download “Electricity” on iTunes. We’ll be listening to it on repeat this week!