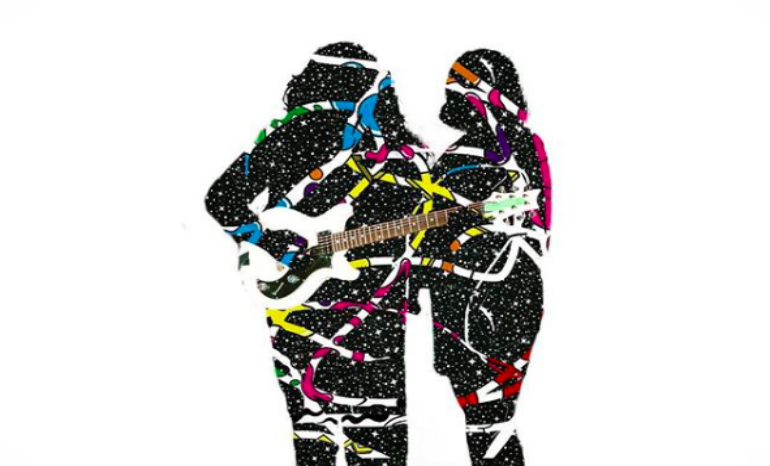 The New Jersey-based indie pop-rock duo Brick + Mortar (Brandon Asraf on bass and vocals and John Tacon on drums, electric samples, and vocals) just released their new album Meta Meta Etc. last month and we’re loving it! Their single “Saturday Night” has been featured on Billboard and has been included in Spotify’s “New Noise” playlist. In the midst of promoting their new album, Brick + Mortar took some time out of their schedule to speak with us about their band origin, their favorite shows they’ve played, and how they’d love to collaborate with Kanye West someday. Check out the interview below!

Thanks for taking the time to speak with us! I’m guessing that Brick + Mortar doesn’t have anything to do with stores; what inspired your band name?

Brandon: Our name has become more and more fitting for us as a band. To me, it means coming from nothing and building your own world brick by brick. If nobody sees your vision the way you do, don’t wait for the world, just build it.

John: You almost have to go through a bunch of shit for your band name to really take hold. After all we’ve been through, I’d say we feel more Brick + Mortar than ever. When we first started, it was a moniker one of our friends was going to use for his project, but ultimately he moved away. We both kind of liked the name and decided on it. Pro-tip to new bands starting out looking for a band name: To prevent any online search confusion, don’t use characters in your name. It will save a lot of headaches.

How did the two of you meet and when did you decide to start Brick + Mortar?

Brandon: Tacon and I met in 8th grade. We were originally lunchroom enemies, but music changed all that. I’m not a real believer in fate, but my life changed the day I saw Tacon play in the school talent show. Watching him gave me a direction to some extent because I knew I wanted to attain the skill and be as happy as Tacon looked playing on that stage. Shortly after, we became really good friends. He convinced me to pick up the bass and we’d just jam for hours on end in my basement. What came out was this intense, instrumental, improv, prog music where we really honed our chops and got to know each other musically. Once we felt confident enough, we started playing out under the name The Black Rhythm. It wasn’t till I was around 24 that I tried singing and Brick + Mortar was born.

John: When we did start to play, Brandon was down to do anything. I’d hit him with some complex odd meter rhythms, and he’d just follow along almost as if he’d been playing for years. From playing in a metal band before this, playing with Brandon was super refreshing. He made it easy to transition into playing another band; not only because he was a good friend, but I loved the stuff we were coming up with.

Your latest song “Saturday Night” is upbeat, but the message is intense. Can you talk about what it’s about and what influenced you to write it?

Brandon: I’m open about my life and I admit to having experiences with drugs and an appetite for addiction. With that being said, an alarming rate of people are dying right now because of drugs. I wanted to write a song that was a reflection of the drug culture I see around me. History tells us that humans and drugs have always gone hand in hand, but be careful because nobody is bigger than drugs itself. If you think you are Superman, you are going to end up dead.

You just released your debut full-length album Meta Meta Etc. How does that feel? Any touring in the works?

Brandon: Honestly, at the moment of writing this interview, we are headed for 1 million plays of our album Meta Meta Etc. on Spotify alone. To us, that is a big deal. We released this record 100% independently and wondered how it would be received. It feels good to put something out and know you’re the real deal. You can make your own dreams happen, you just have to grind it out. We’re hoping to jump back on tour in the fall/winter sometime.

John: We took our time with it and aspired to make the best record we could possibly make. This record was plagued with setbacks but I’m so glad that it’s out in the world.

As a Jersey girl myself, I have to ask: Since Brick + Mortar is from Asbury Park, did Bruce Springsteen have any influence on you growing up?

Brandon: I heard Bruce at every BBQ growing up, but wasn’t someone who listened to him growing up. Lately, I’ve been thinking of diving into his repertoire. Influence wise, I aim to always be as nice as he seems to be as a human being. Met him once when I worked at the movies and he was just as nice with every fan that mobbed him.

John: I guess theoretically he did because he was my first concert ever and I listened to a few of his albums on cassette. I have yet to really listen to him since then. Gotta love the guy, even if you think his music sucks.

Brandon: For me, it’s a show we played in Germany. I was really upset because I thought my father would come to it since it was my first tour in Europe and he is banned from America. I remember being heartbroken. Like, I worked so hard to play a show in front of my father for the first time and he didn’t show up. But then something magic happened. I realized I don’t do this for him, I do it for me and the crowd was so excepting. They were my father for the night.

John: I’d say Barrowland in Glasgow. The crowd started chanting “HERE WE… HERE WE… HERE WE F*CKIN’ GO” loud as f*ck in the intro to one of our songs, “One Little Pill.” Just an unreal city, crowd, and venue.

If you could collaborate with any artist/band, who would you choose?

Brandon: Kanye West out of curiosity.

John: One of the best shows I’ve seen was Man Man in Austin, TX at SXSW years ago. They absolutely crushed it. They were passing around a handle of whisky, Honus climbed up a light truss, crowd was nuts… crazy show for sure.

Brandon: Tacon’s answer makes me wish I was there for that show. I once saw Why? after the singer Yoni got in a car accident. I remember it being at a church in Philly and him showing up with both his arms in casts. It was an awesome show and inspiring to see the dedication he has for his fans and art form.

Instrument you wish you could play?

Brandon: Horns. Honestly, it’s such an expressive instrument and there are so many different ways to get the sound you want.

John: The piano. I can kind of play, but I’d love to be as fluent as I am with drums.

For more info on Brick + Mortar, check out http://www.brmr.net/.