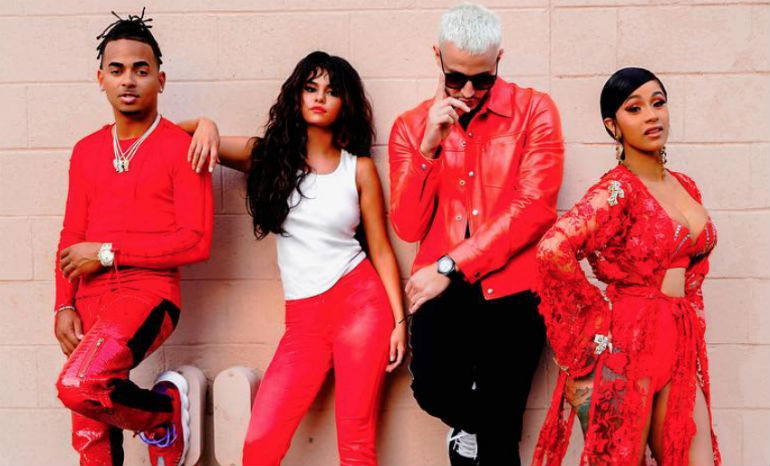 With the rise of reggaeton in mainstream pop, it’s no surprise we have a couple of producers wanting to connect with latin artists. DJ Snake announced a collaboration in August with Ozuna, Cardi B, and Selena Gomez for a song called “Taki Taki” by tweeting a photo of four directors chairs including a tiny chair for Cardi B’s daughter, Kulture. We were blessed on instagram from all of the artists with a couple of sneak peaks from their music video shoot.

DJ Snake originally sent the track to Ozuna, but then recruited latina pop queens Cardi B and Selena Gomez to add their own flair. The song is mostly sung in Spanish and it’s a little more explicit than you might think! However, we can tell it’s a certified club banger on the first listen.

Ozuna starts out the seduction game by describing how the girls look and if they want to come his way. “Dance as if it were the last time // And show me that little step that I do not know // A nice little kiss, baby // Taki taki // Taki taki, rumba.”

Next, Cardi’s verse acknowledges his advances but doesn’t quite give in so easily.

“He said he really wanna see me more // I said we should have a date, where? At the Lamborghini store.” She then adds another verse in Spanish.

Selena then comes through with her response  “Careful when you come through my way // My body know how to play // Work it, keep it tight everyday // And I, I, I know you need a taste.” Before she sings another verse in Spanish, she’s confident that “What my taki taki wants, My taki taki gets.”

Although summer is over, we have heat from these latin artists to keep us company into the cooler months.

At this point, we think we’re all wondering what “taki taki” means. Cardi says Ozuna is the one who made up the word. She said, “These reggaeton artists be making some s*** up.” Ozone himself, however, said, “It’s nothing. It’s like a dance. It’s a flow.”

Give the song a listen and let us know what you think “Taki Taki” means!