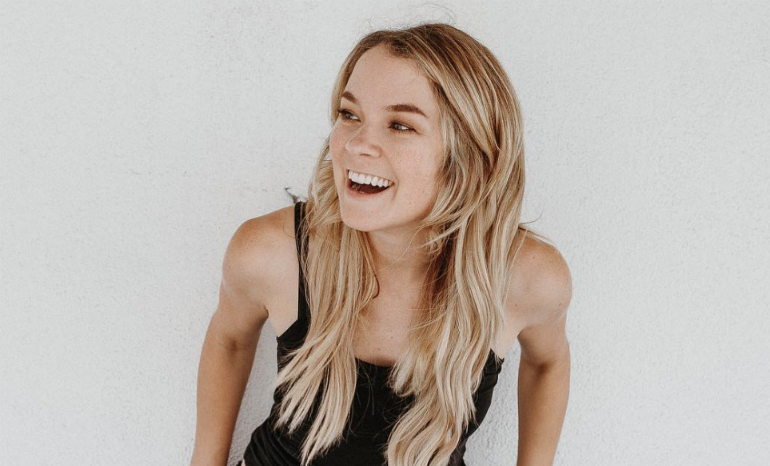 We recently had the opportunity to interview Lenay, the former host of MTV’s 10 on Top. Most recently, she’s kicked off her music career, and she even has a dedicated YouTube following, where she’s posted numerous covers of popular songs. Now, Lenay has released her brand new single, “La La Land,” which can be heard here. Also, the video for the track can be viewed here. We chatted with Lenay about the new track and more below!
You just released your new single, “La La Land.” Tell us all about the song and what it means to you.
“La La Land” is my ode to LA!  About the glamour and the imperfections. It’s also about when we broke down in Utah on the 30-hour drive from Minnesota to California.
How does “La La Land” differentiate from your previous 3 singles — “Daylight,” “You Feel Like Home,” and “Drive for Miles?”
I love those songs too much and even though we took them off Spotify, they are still on YouTube!  My older songs are a little more heavily acoustic guitar driven, and a little bit more all over the place with my writing style. “You Feel Like Home” is like 10 verses and no chorus. I think that’s my favorite music video I’ve ever made, though! Aside from the one I just uploaded for my new song “La La Land,” which you should totally go check out. *cough cough*
You used to host MTV’s 10 on Top. Do you think that experience helped shape your career as a musician?
For sure! I think being able to meet so many cool musicians who all have different styles and personalities, was really inspiring. To be able to meet people at various points in their careers being a part of helping promote their projects, be inspired, go home and work even harder on writing songs!!  It’s crazy to think it’s finally time to release some.
You’re currently working on your debut album. Can you give us any hints on what we can expect from the album? A possible title?
Definitely themes around each song. This one was old school Hollywood theme. I had so much fun planning my outfits/photoshoots/music video around that theme. I wore a big fluffy white skirt like Marilyn Monroe did at a photoshoot once (that’s my single cover!) and a photoshoot leaning over a rooftop was inspired off another photo of hers as well. Check them out on my Instagram!
You also have a Spanish Youtube Channel in addition to your music channel. What made you want to create a Spanish channel and what does the content on that channel mean to you?
When I was little, I wanted to be a Spanish teacher and took a lot of classes!  Then I started hosting shows for Red Bull and then MTV and at the same time fell in love with writing my own songs, so I ended up not teaching. But I still loved speaking Spanish, and when I met my boyfriend (he’s from Chile), he suggested I start a Spanish YouTube channel and I was like, “why not!”  So he helped me!
You have quite a few covers of popular songs on your music channel. What’s your favorite cover you’ve ever done and why?
I think “If I Die Young,” “Malibu,” and “Let Her Go.” “Let Her Go” is where I twin myself so I kind of like those ones when I do that.
When you’re not in the studio or making YouTube videos, what do you like to do for fun to unwind? Do you have any unusual hobbies?
I like making s’mores over our kitchen stovetop. But I just came back from Nashville to find that my boyfriend has eaten the entire bag of marshmallows and now I can’t make s’mores until I get more and I keep forgetting, so that’s a bummer.  I’m going to have to hide them next time.
Did living in Minnesota and then moving to Los Angeles influence your music at all? Why or why not?
Probably! I think ‘Minnesota nice’ influenced me more than anything. I kind of love smiling a lot.
Do you have any upcoming shows or tours that fans can keep an eye out for?
I’ve had 4 shows so far and I can’t wait to have more! Not sure when. I think I need to put a few more songs out first and then look into it again!  Can’t wait to plan my outfits and how I want to perform!
Is there anything else you’d like to add that we might not have touched on?
I just released my own APP!! www.lenay.fanhero.com download it and let’s hang. Also, follow me on Instagram!! and Spotify!!
You can also keep up with Lenay at her YouTube channel here and at her official website.
Featured Image: Instagram (@LenayChantelle)