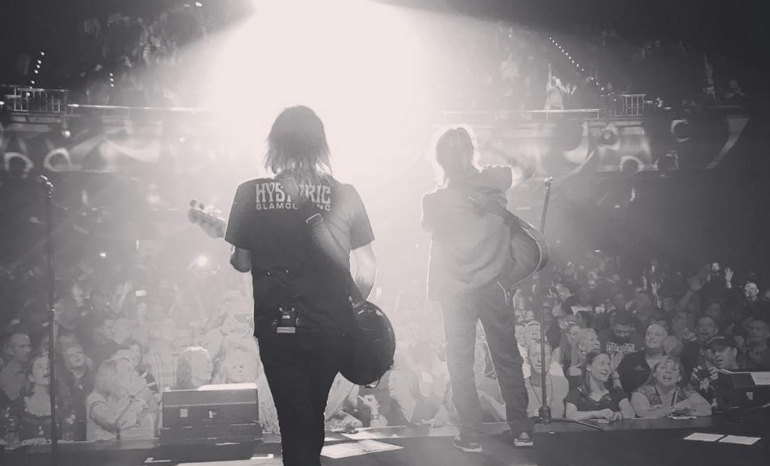 Can you believe songs like “Iris” and “Slide” by multi-platinum rockers, the Goo Goo Dolls, turned 20 years old this year? Dizzy Up the Girl turned 20 just last month and to commemorate that, the band has just embarked on a national tour. With its certified 4x platinum hit by the RIAA, “Iris,” Dizzy, a 4x platinum certified record, is a key piece of music for the band.

Aside from playing the album in full, the band will also play some deep cuts and other hits fans haven’t heard live in quite some time. A few weeks back, while practicing for the tour in New Jersey, I was able to chat with the Goo Goo Dolls’ bassist/vocalist, Robby Takac. Check out what Takac had to say about the last 20 years, the old and new music and what to expect on this tour. We can’t wait to see this show when it hits Beacon Theatre on October 15!

Can you believe this album is 20 years old?

I know, right? I can’t believe my daughter is six more or less that album is 20! It’s crazy.

Yeah, it’s crazy how it all went by so quickly, honestly.

You know, we have had a pretty active relationship with a lot of this album. We play six songs from it pretty much every night. I’ve had an ongoing relationship with this record, but this format that we’re performing under this fall has really given us a chance to kind of visit a lot of the record that sort of wasn’t in that cycle. The format of the whole show has given us the ability to go even deeper into our catalog, probably more than we would have for a show.

With the format being different, we have the freedom to do a little bit more of that stuff. We’ve gone even deeper into the catalog than I think we had expected! You know, we’re not much of a band to look back. We try to look forward as much as we can, and I think that’s why we’ve managed to stick it out for over 30 years now. It’s all about what’s next! I think this process has really given us the chance to look back in a way we never really do. John [Rzeznik] and I sat down, and we talked our way through the album for an hour and a half. I don’t think we’ve ever done that, even when we were making it! It’s kind of cathartic, I think in general, just to do this whole process.

That’s really great to hear. Are there any songs that you’re excited to play on this tour that you haven’t played?

There’s this song called “Bullet Proof” that we haven’t played in years that I’m really excited to play. There’s a couple of my songs that we haven’t played live—maybe once or twice—which are making their way in; I’m excited that they get a rebirth! We’re doing some songs off of Superstar Car Wash, some songs off of Hold Me Up. We haven’t done songs off of Hold Me Up in god knows how long. It’s just going to be a fun night! Definitely, if you’re a seasoned fan, you’ll be pretty blown away by a lot of what you’re hearing that night.

That’s really cool! So a lot of people don’t know that you guys actually started off as a punk rock band. What inspired the change throughout the years?

I don’t think there was ever really an inspiration for a change so much. I think it was just growing up, making the next record, trying to do something a little bit further along than the last one was, which was especially important to John. He reaches out to places that are out of our comfort zone. You hope to drag some fans along with you, and it doesn’t necessarily always happen. I think in general, the growth has been organic enough. People have been growing up along with us. I think a lot of people have made the journey.

Of course. I know we’re about to backtrack into the past with this tour, but any chance of new music soon?

Oh yeah! We’ve got about a half dozen songs kind of bubbling up right now. We’ll be in recording probably as soon as this tour is finished up.

Love to hear that! Anything else you would like to add?

We’re just jazzed to play the Beacon again! It’s an amazing place. It’s not a place that a bunch of bums like us usually get to play, so it’s nice to be able to go and make that happen. I’m excited to bring this whole Dizzy show out to people. It’s going to be a little different than the average Goo Goo Dolls show. It’s a good time to celebrate a little bit more of the history of the band, too, and I think that’s what we’re looking to do! It’s exciting.

Click here for tickets and more info on the Dizzy Up the Girl 20th Anniversary Tour!