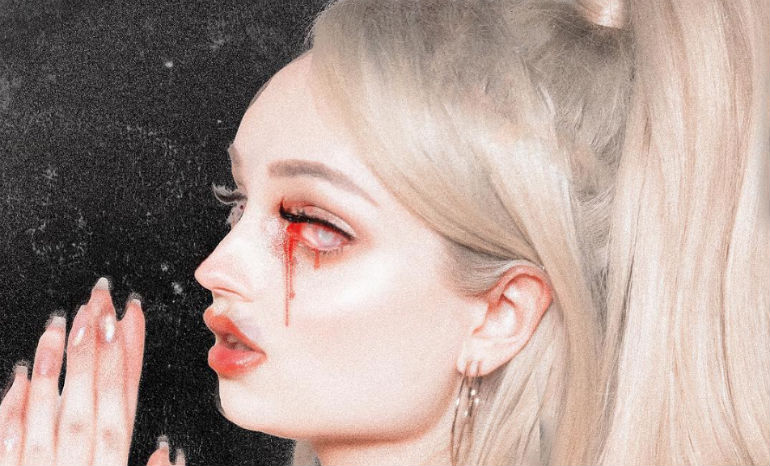 Watch out witches! Kim Petras is taking over! This year, she kicks off October right with the release of her brand new mixtape TURN OFF THE LIGHT, VOL. 1, which is completely dedicated to Halloween.

Our new favorite pop princess channels the perfect mix of glamour and gore to create a project like nothing she’s ever done before. TURN OFF THE LIGHT, VOL. 1 is full of surprises as Petras embraces dance-electro beats, thick basslines, and manipulated vocals. Proving that she’s had a few tricks up her sleeve, Petras shocks fans with tracks like “In The Next Life” where she sings in German for the first time, and the title track “Turn Off The Light” featuring Elvira (Mistress of the Dark) herself!

Although Petra is most known for her fun, upbeat, bubblegum pop femme personality, she definitely puts her bubbly reputation aside to uncover a much darker, cynical side of her image.

The first track to open TURN OFF THE LIGHT, VOL. 1 is the brief, yet powerful “omen.” The suspense of this song will leave you on the edge of your seat, anxiously awaiting to meet the unheard vocals of Petras’ evil alter ego. “Omen” showcases the wonderful use of choppy, twisted instrumentals, which gracefully lead us into the most popular track “Close Your Eyes.”

“Close Your Eyes” stands out as the most poppy, sing-along track on the project. Within the first week of the mixtape’s release, many fans went to Instagram to report to Petras that “Close Your Eyes” had already been played in a handful of nightclubs around the nation. The truth of the matter is, party-goers LOVE a festive queen like Petras!

It’s important to note Petras’ witty use of language on this mixtape. Track 3 is cleverly titled “TRANSylvania,” not only inspired by Halloween, but by her LGBTQ pride. Petras has been very open about being a transgender woman and takes pride in her journey. The singer actually holds the title of being one of the world’s youngest transsexual individuals. In a very personal interview, teenage Petras explains that since the young age of two, she has identified as female. She sets a great example that being yourself should be both encouraged and celebrated. We praise Petras for living her best life in which ever way she chooses to!

In an interview with OUT, Petras walks through each song and shares her commentary on the creation of this project.  She opens up about about her excitement to work with Elvira, sharing that the closing speech in”Turn Off The Light” is the voice of Elvira, “which is so crazy… very like inspired by Britney’s Blackout era and ‘Monster Mash’ and yeah, it’s spooky music. I loved the transition on that one, the way it starts with the banging on the door, kind of pulling up to a Halloween party. That’s one of my faves.”

Mid way through the project, Petras introduces her gory feelings of love and lust on track 5, “Tell Me It’s a Nightmare.” The vibe of this song makes it very clear that “evil Kim” is out for blood. She channels a fierce maneater character that takes over her body. We honestly can’t help but think about Jennifer’s Body, a comedic horror film from 2009 that is still a gem today. The movie is centered around Megan Fox‘s character “Jennifer,” who gets cursed and turns into a demon who must prey on high school boys to stay alive. If you’re familiar with both pieces of work, it’s not hard to point out the parallels.

“i don’t wanna die” makes a great interlude into the 7th track, “In a Next Life.” Petras also admitted to OUT that “In a Next Life” is her favorite track from the project. Here, she tells the creative anecdote of entering her next life after death and accepting that she’s gone evil. Here, “evil Kim” begins to attack any “goodness” left inside herself. Evil eventually possesses Kim entirely, as she warns us in the chorus, “First time in my life // I’m not afraid (I’m not afraid)… There’s no turning back now // I can’t be saved //And in the next life they’ll remember me, remember me.” Opening the second verse, Petras starts singing in German. This is the first time she’s ever sang in her native language on an official release.

Petras finishes the mixtape off strong with a KILLER outro, comically titled “Boo! Bitch!.” This zesty outro is extemely heavy with instrumentals and lacks hardly any lyrics. In fact, Petras refrains from singing throughout the first half of the track until she breaks the silence with her iconic ad-lib, “Woo-ah!”

It’s safe to say that we can crown Kim Petras as the new Queen of Halloween! Get excited for the holiday this year by blasting TURN OFF THE LIGHT, VOL. 1 all month long! And, don’t worry… we won’t judge you if you play it once Halloween comes to an end, either!