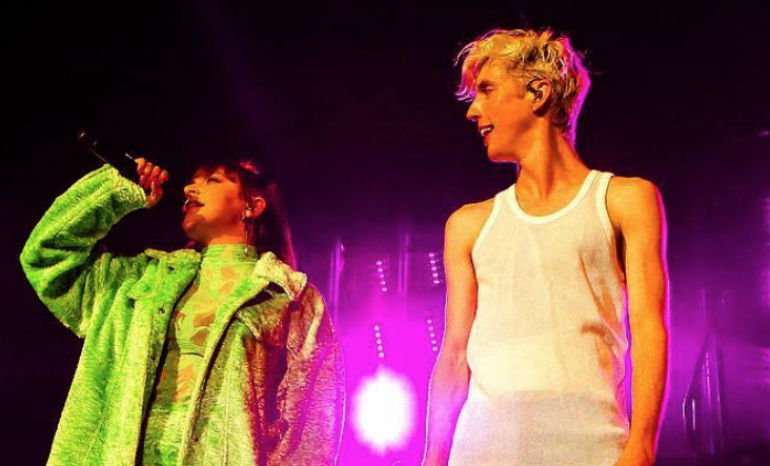 “We have some big ass surprises coming,” Troye Sivan tweeted just a few days before his sold-out show at Radio City Music Hall in New York City. As part of his Bloom tour, this would be the first time the burgeoning Australian pop star would play at the iconic venue for a sea of devoted fans. Although Troye is only 23 years old, he has one of the most diverse fanbases in pop music today.

Leland, one of Troye’s frequent songwriting collaborators opened the show. He’s had quite the songwriting journey and mentioned writing songs for other pop artists, such as Selena Gomez and Daya. Kim Petras, a real-life Barbie doll, had the crowd pumped up as she performed a slew of her electro-pop hits, including “Heart to Break” and “Can’t do Better.” Troye fittingly kicked off his 90-minute set with “Seventeen,” which is also the opening track from his album Bloom. The energy was high after he segwayed into his dance hits “Bloom” and “Plum.” He then addressed the crowd about his incredible view from the stage and how pleased he was that he was getting the chance to play at such a beautiful venue. During this unsuspecting moment, Troye invited a fan up to the stage to share the view with him. It seemed like a random moment until the fan, Judah, invited his boyfriend Daniel up on the stage. The first big surprise of the night was that the screaming crowd got to witness Judah getting down on one knee and proposing to Daniel. Troye also made sure to point out that they were wearing matching kippahs (“Jewish like me, which I like!”). He explained the sweet moment as Judah had reached out to him through email and asked if he could propose on stage at Radio City. Sivan than exclaimed, “Mazel Tov!” as the newly engaged couple walked off stage. Following the proposal, Troye went on to perform his emotionally charged ballad “Heaven” to a bright, phone-lit venue. “I’ve always dreamed of saying stuff like ‘New York City, Let me Hear You,” he said, right before he performed one of his biggest hit, “Wild.” After “Wild,” there was an outfit and an orchestra-inspired set change. A couch appeared on the elevated part of the stage flanked by lamps. Sivan performed ballads like “Postcard” and “The Good Side” in an all-white outfit. The next surprise was the debut of a song from Troye’s upcoming movie, Boy Erased. “I really wanted to be a part of this project,” Troye said. He briefly explained that the story follows a young man and his experience at a gay conversion therapy camp. He announced that “The Good Side” would be featured in the film as well as “Revelation,” a song he wrote specifically for the movie. “I don’t know if I’m allowed to sing it yet, hope it’s okay,” before performing the unreleased track for the first time. Perhaps the biggest surprised of the night, however, was when Charli XCX surprised the crowd with the debut of her and Troye’s new song “1999.” After bringing her out, Troye gushed as he called Charli one of his “pop icons” and a “tastemaker.”

Troye then teased the New York crowd by saying “Animal” was his last song. He said, “Maybe if you scream loud enough, I’ll come out and perform two more songs.” Well, the crowd certainly didn’t disappoint, and his encore consisted of his biggest hits “Youth” and “My! My! My!”

During the second half of “My My! My!,” Troye transformed the song into an EDM banger, which ultimately turned Radio City into a nightclub. He also mentioned at one point that he likes to stand on the elevated part of the stage because it makes him feel like Taylor Swift. LOL.

With his stage presence, dance moves, and Taylor Swift ambition, Troye proves that his stage will only get bigger. By being one of the most relatable and open pop stars out there, he’s established a strong connection with his legions of fans. Don’t be surprised if Troye Sivan sells out arenas very soon, because trust us… it’s going to happen.