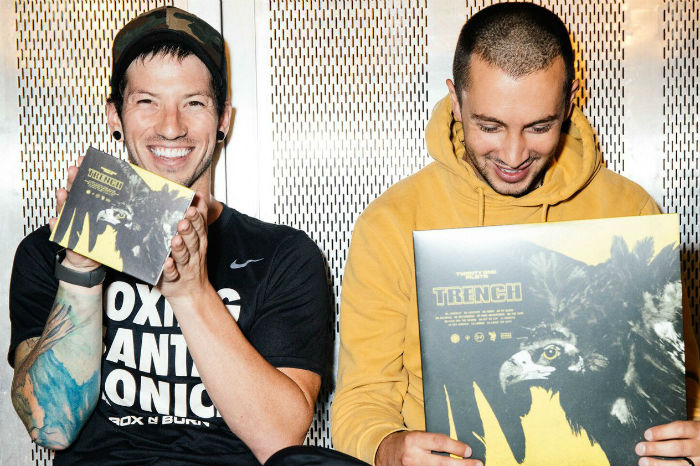 Welcome to Trench. After what seems like three long years, Ohio-based duo Twenty One Pilots released their fifth studio album on October 5, 2018. Trench is the follow-up to 2015’s Blurryface and actually dives deeper into the Blurryface character.

In July, we received the duo’s first two singles, “Jumpsuit” and “Nico and the Niners.” These songs only brought more hype surrounding the album as tour dates and new merchandise were released. Twenty One Pilots also released “Levitate” and “My Blood” back in August, ahead of the album. The first three songs were accompanied by music videos diving into the experience of Trench. Now we finally have the whole Trench story.

Unlike Tyler Joseph and Josh Dun’s previous albums, Trench is more of a full-blown concept album. It follows the character Clancy in the made up city of Dema. Additionally, listeners meet Nico, which is Blurryface’s real name. Much of Trench’s narrative was released through a series of online posts discovered by fans. Pieces of the story are finally coming together and theories are buzzing around the Internet. Where the album excels is that, for the fans, there’s plenty of lore to dive into. For the average listener, however, not knowing the whole story does not make or break the listening experience.

Twenty One Pilots have created songs that speak to many listeners over the years. Trench is no exception. The lyrics cover themes such as family, religion, death, fame, suicide and insecurities. Also, in classic Twenty One Pilots fashion, many of these dark topics are hidden among catchy hooks. To fully understand all of Tyler’s words, Trench definitely warrants multiple listens.

Musically, this new LP shows a lot of growth for the duo. Tyler sounds more confident with mixing in bass and synthesizers alongside his usual ukulele and piano. In particular, “Jumpsuit” and “My Blood” have bass lines that are jaw dropping. Another song that musically stands out is “Morph,” as it blends genres and breathes new life into the album. With the help of Paul Meany of Mutemath, Tyler has created an album with quality production. Trench’s smooth transitions, unique beats, and careful instrumentation really show the band’s growth as musicians.

One song in particular that stands out from the rest is “Neon Gravestones.” Twenty One Pilots have had previous songs dealing with suicide and mental illness, but this song is more straightforward and political. Tyler sings about the glorification of suicide when we should be looking up to our elders who lived long lives instead. He also mentions how often the perception is that celebrities do not struggle with mental illness, but we glorify them when they die young. It’s a heavy song, but a much needed, fresh opinion. “Neon Gravestones” compares to songs of theirs like “Guns for Hands,” that have the power to help listeners through difficult situations.

Trench is a musical journey and the last three songs are the highlight of the listening experience. “Pet Cheetah” may sound like a silly name, but it brings out the best of Tyler’s rapping and beat making skills. “Legend” sounds like a song off of 2013’s Vessel in the best way possible. It may sound like a happy ukulele song, but lyrically, it’s an ode to Tyler’s grandfather who recently passed. Out of all the songs, “Legend” is most likely to bring on some tears.

Lastly, “Leave the City” is the perfect closer. With a slow build and soft vocals, it wraps up the story of Trench beautifully. “Leave the City” has meaningful lyrics and even provides some fan service by ending on the same last note as “Truce” from Vessel.

Overall, Trench is Twenty One Pilots’ most mature album to date. Songs like “Levitate” and “Chlorine” show Tyler’s confidence in their musicality and lyrics. Josh contributes some of his best drum fills to keep a steady backbeat to the album’s story. There are still elements that please Blurryface fans, such as the love song “Smithereens” and catchy, nostalgic tracks like “The Hype.” Even though the new album has some familiarity, it makes multiple bold moves that music fans can appreciate. This album has the potential to do well on the charts and during awards season.

As usual, Twenty One Pilots is embracing the new era with new colors, logos and art. We look forward to seeing how these new aesthetics and songs translate into the live shows. If you don’t want to miss out on hearing Trench in person click here.