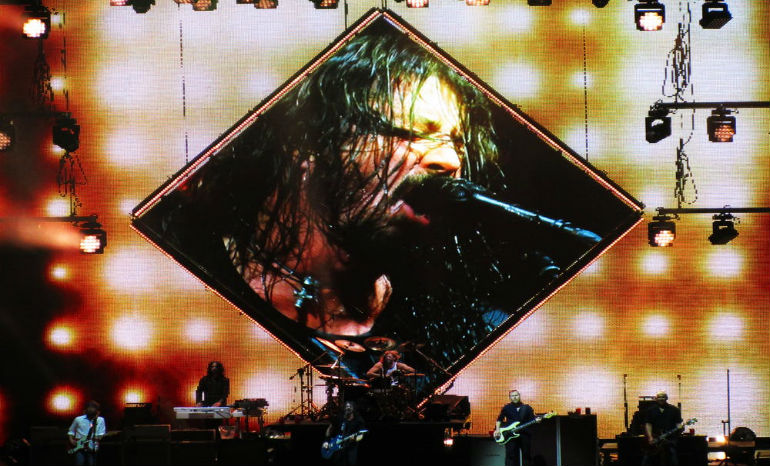 This is a call! The Foo Fighters love to bring their fans on stage, especially if they’re kids! At their concert in Kansas City, Missouri this past Friday, Foo Fighters front man Dave Grohl invited 10-year-old fan Collier Cash Rule to perform on stage alongside the band! After being asked which songs he knew how to play, Rule performed Metallica’s “Enter Sandman” on Grohl’s guitar while Grohl sang. Grohl was so impressed that he gave Rule his guitar to keep!

Back in May, an 8-year-old fan referred to as “Little Fonzie” came on stage with the band to play an incredible drum solo in Nashville. The only problem? He wouldn’t leave the stage! He was up there for over 5 minutes playing on drummer Taylor Hawkins’ kit. At one point, Grohl said to the crowd “He’s still going…Can I have my concert back?” He then jokingly asked where Little Fonzie’s dad was, saying, “What are we gonna do? There’s nothing we can do. We’re not in daycare right now.” Eventually, Grohl got Little Fonzie off by telling him there was some Coke to drink on the side of the stage. The crowd got some special entertainment during this show and I’m sure this is a moment Little Fonzie will never forget! Last, but certainly not least, Grohl loves performing with his own daughters! At the Foo Fighters’ Oakland concert back in May, Grohl brought up two of his daughters, Violet, 12, and Harper, 9, to sing a few songs including the Foo Fighters’ hit “The Sky Is A Neighborhood.” Violet and Harper sang beautiful harmonies alongside their dad, who sang lead and played the song on an acoustic guitar. They all did such an incredible job and there’s no doubting the fact that the Grohl family is extremely talented! Featured image: pexels.com (@kitty-pierce-335511)