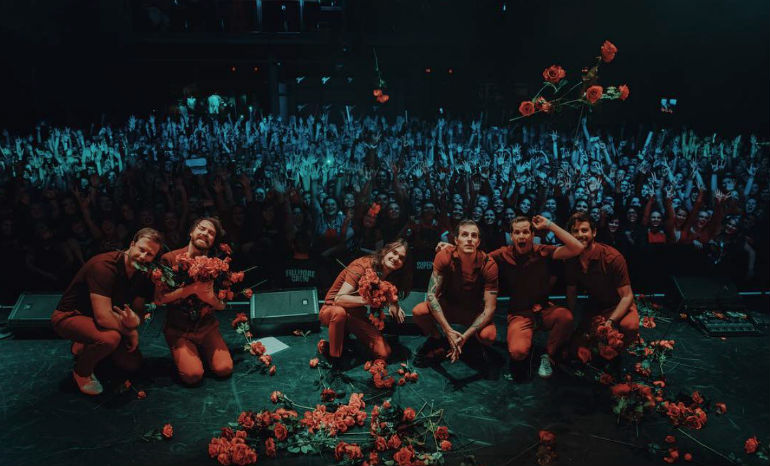 Last Saturday, October 13, The Maine said goodbye to their 2017 album, Lovely Little Lonely. In the most extra way possible, The band held a funeral for the album at The Fillmore in Silver Spring, Maryland. The band requested that fans wear red to the show and bring fake roses to say goodbye. They also announced at the show that they were going to begin recording their new album on Monday, October 15. We personally had the pleasure of attending and had the opportunity to say goodbye to one of our all-time favorite albums.

At the moment, there’s no specific set date for any new music to be released. The band mentioned at the funeral that they haven’t even written anything for their seventh album yet, but it’s still great news that it’s in the works regardless! They also shared that they are recording it in Maryland, nearby to the venue where the funeral took place.

Last night was bigger than us. 8123 showed its power. Still buzzing off the energy and going to carry it over into making album 7. This is the end of an era but we will be back better than ever. All the love in the world ❤️ 🥀 We are 8123 pic.twitter.com/zv2NMT3ITJ

The Maine made sure to make this funeral really realistic, and they asked every fan that brought a red rose to place it in a coffin, which they decorated the stage with later on.

Last night was bigger than us. 8123 showed its power. Still buzzing off the energy and going to carry it over into making album 7. This is the end of an era but we will be back better than ever. All the love in the world ❤️ 🥀 We are 8123

The sheer energy of the crowd and the love spread at the funeral for that album was truly astounding. The energy in the room for one last goodbye to an album that truly changed peoples lives really brought the show to a whole other level.

Sometimes you have to die a little to be alive.

In case it wasn’t obvious, this was definitely the happiest and most fun funeral we’ve attended to date.