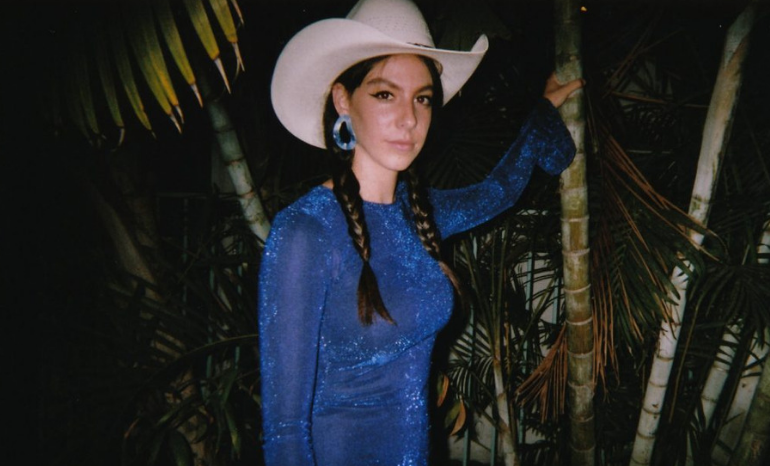 Rodes Rollins might just been one of the coolest people we’ve gotten to talk to here at Soundigest. Since she made her solo debut, premiering her first ever single, “Young & Thriving,” on Billboard in 2016, she’s established quite a name for herself.  We got to talk to her about the evolution of her music through this period, as well as a few really inspiring projects she’s working on, most notably her upcoming A/B sides, Velvet, due out October 18.  See what she has to say below, and then get to know her a little bit better on Instagram, Facebook, and Twitter.

I have to ask. You moved from Boulder to Brooklyn. You’ve identified your music as “cowgirl poetry,” drawing a lot of inspiration from your hometown in Colorado. Have your inspirations changed at all since you moved to NYC?
Yes! My inspirations are constantly changing.  I think it was only when I moved to New York that I really began to consciously tap into a Western sound—maybe because I began longing for the West.  Now, I’m collecting inspiration from new places and sounds. I’ve learned a ton from my artist friends in New York, and I’m very inspired by the community of friends I have in Mexico City, so I’ve definitely been incorporating that inspiration to the work I do today.
We got to hear a preview of your upcoming Velvet A/B Sides. Can you tell us a little bit about the writing process for the new project? How has it differed from your debut album Young Adult?
This project varied in a lot of ways from my first. Young Adult was much more autobiographical in nature, whereas, Velvet is much more anecdotal. I also worked with a different producer on these two songs than I have in the past.  He pushed for a much more organic sound. “Wrong Turn” for example was sung in one full take.
You worked with producer Alex Goose on both projects. How did that collaboration come about?
I only worked with Alex Goose on Young Adult and the two singles I put out earlier this year. Alex and I were actually put in touch by my old manager who heard us both on SoundCloud and thought we would mesh. Turns out he was right!
You’ve released three singles in 2018, “Nasty Woman,” “Boom Pow,” and “Mystery Man.”  Will both of these tracks appear on Velvet?
“Mystery Man” is the A-Side of Velvet and “Wrong Turn” (one of my favorite songs I’ve written to date) is the B-Side.
I loved reading about your “Nasty Woman” release party, where you shared the stories of 10 incredible women! Can you tell our readers a little bit about how that came together and how the night went overall?
When I released “Nasty Woman” I didn’t simply want to share a song and be done with it.  I really felt like I wanted to incorporate a larger community of women in that release than just myself.  The women who I got to interview and photograph were a mix of friends, family and cold calls to women who inspired me.  It was such an incredible experience for me to interview and photograph them.  The night of the exhibition and performance was so wonderful! We packed 200 people into an 80 person room.
Speaking of “Nasty Woman,” the music video gave me life. Will you walk us through the day of the video shoot?
I’m glad to hear it! Honestly, that was a really hard week for me. I was not feeling like my best self, and I certainly wasn’t up for performing and being on camera! But, I told myself, “Fake it, and perform like it’s the best day ever,” and that’s what I did! I ended up having a great time at that shoot and I’m really happy to have released that video. Sometimes you just have to put on your big girl boots and take the gig.
With Velvet due out this fall, do you have any plans for a tour or any live dates in NY? I saw that you have your release party coming up on October 18.
Yes! I will be playing a release show at The Broken Shaker this Thursday 10/18 in NY. This spring I’m excited to begin rolling out a new EP and will be touring around the US and Mexico in honor of that release.
Is there anyone you’d really love to collaborate with? I was checking out the roster of your management company, Killphonic, and it seems like there might be some really cool collaboration opportunities there!
Absolutely! I actually met the folks over at Killphonic because I had a writing session with one of their artists, Sam Valdez. She and I wrote a song that I really love, and I hope to release it sometime soon. First, we’ve got to finish the demo! 😉
What has been the most exciting milestone you’ve reached since you started releasing music as Rodes Rollins? And what’s the next goal you’re working toward within your career?
That’s a tough one! I’m not sure if it’s a milestone or more so a broad experience that I’m proud to have had thanks to my music, but I have had the opportunity to travel quite a bit and meet lots of interesting people from around the world. This is such a rewarding and enriching feeling, and I really hope to do a lot more of it in the years to come!
And finally, can you give us three fun facts about yourself that your fans might not know?
I am a Scorpio! I danced in a “Baile Folklórico” group growing up. I used to play trumpet in a jazz band.
Featured Image: Sulecia Valenzuela