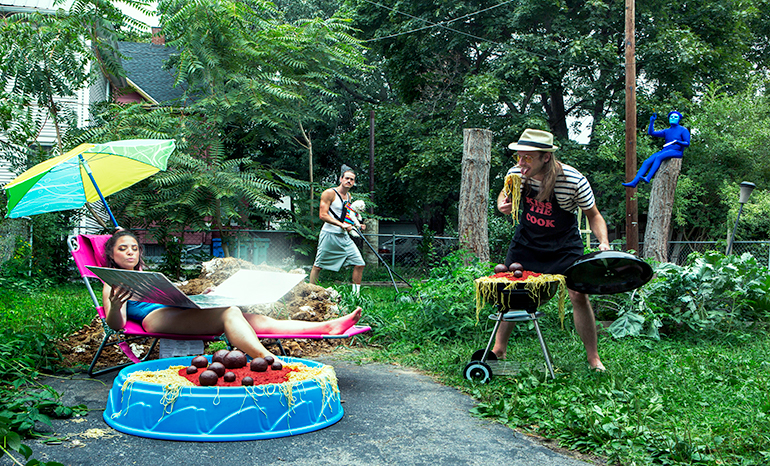 Looking for something a little different to bop along to? Look no further than off-kilter pop group KOPPS. The group just released their latest single “Baby I’m Dead Inside,” along with their corresponding music video, and in the midst of all the excitement, they took some time to speak with us. We chatted with KOPPS about everything from their killer music videos to goth dads. Check it out!

Thanks so much for speaking with us! Your sound is really fun and a bit different than ‘normal’ pop. How did you guys come together as a band and decide to shake up the idea of pop?

Back in 2009, Kyle and Patricia wanted to experiment with making music that sounded like ’90s vocal house, La Bouche, etc. We wanted it to be high energy and knew we wanted the live aspect to be very entertaining. We definitely needed more members once things started picking up, and that’s where Trav and Gesture came in.

Where did the name KOPPS come from?

Keep out of papa’s pringles, son

I feel like your newest track “Baby, I’m Dead Inside” can be really relatable to your listeners. Where did the idea for this track come from?

“Baby I’m Dead Inside” is really a song about being over love and feeling disconnected from it. Being in a toxic relationship can sometimes bring out the very worst in you and make you into a person you don’t necessarily know or even like — I think that’s at the root of the concept for this song. The video and the idea of ‘Goth Dad’ was something we cooked up long before the song existed, but we had to wait for the perfect time to utilize it. When the song was born, we knew it was a perfect match.

The music video for “Baby, I’m Dead Inside” is quite zany and fun. Where did you come up with the idea to flip the classic goth teen phase to these dads that never quite grew out of it?

Lots of funny conversations we have as a band turn into things we actually end up doing or using in some capacity. This concept was based off of a convo like that. The term “Goth dad” was thrown around for a couple of years before we actually ended up applying it.

How was it working with your own fathers in your latest music video? Did they enjoy the process, too?

Honestly, all the dads in the vid are actual musicians so it was a great fit. They’re more talented and more goth than all of us combined sooooo easy peasy lemon squeezy, you know? And yeah, they really got into their roles as you can tell by the dad band scenes.

Speaking of music videos, the viral aspect of the “Hott” music video is so intriguing. Is this something that you guys would like to see happen with your music or is it more of a commentary on the way things blow up on social media these days?

I think a little of both. We probably wouldn’t complain that much if we became mega superstars from doing the thing we love, but yeah… we were most certainly providing some commentary on the ridiculous nature of being the “viral” nation that we are. One bajillion views? Oh yeah, baby.

I’ve seen that you guys do a lot of work with Joywave frontman Daniel Armbruster. How has that relationship evolved as you’ve continued to work through your careers?

We all grew up together. We’ve worked on music together for a long time and we don’t really see that changing. He’s been obsessed with us since day one, basically.

If you could collaborate with any other artist or band, or if you could have someone make a cameo in your music video, who would it be?

Certainly Prince, but unfortunately that isn’t gonna be possible unless he’s a hologram. But, in the spirit of taking what I can get, I would also probably be okay with that.

Do you guys have anything else in the works we should be on the lookout for?

~NEW MUSIC~  before and after the new year!

One more thing: Does the lead singer Patricia and bassist Kyle both just so happen to have dogs named Richard, or do you have the same dog?

Well, there you have it, folks! Check out the video for “Baby I’m Dead Inside” HERE: