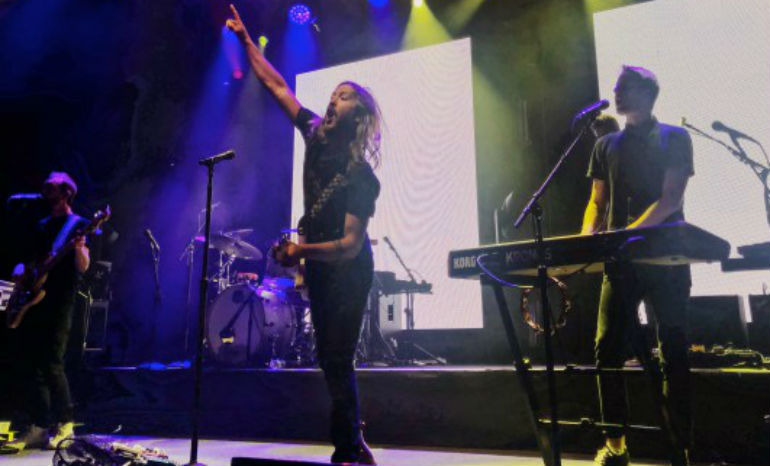 Nashville-based indie-rock band Moon Taxi played a high-energy show on Wednesday night as part of their Good as Gold tour. It was a relatively cold night (because Mother Nature decided to bypass Autumn this year), but the vibes inside of Brooklyn Steel were warmer than ever. People of all ages piled into the warehouse-style venue, drinks in hand, spirits high, ready for a night of music and movement.

Lights flashed shades of yellow and green as Moon Taxi took the stage and broke into their hit song, “Not Too Late,” off of their latest album, Let The Record Play. The audience caught on quickly with vocalist Trevor Terndrup‘s electric liveliness, and they immediately jumped up and down to the chorus’ recognizable lyrics.

The crowd let out a huge cheer as the band announced that it was their first show after a two-week hiatus because their drummer, Tyler Ritter, got hitched. His post-honeymoon glow was evident during his impressive drum solo to The Beatles‘ “Eleanor Rigby.” Ritter completely jammed out solo while the audience sang the iconic lyrics.

The remainder of Moon Taxi’s set was filled with exuberant renditions of hits “Morocco,” “Mercury” and “Good as Gold.” At one point, Terndrup’s hat flew off from how crazy his enthusiasm was! Then, as soon as the lights dimmed to a dark red color, the audience knew what was coming next. The five-piece broke into one of their most popular songs, “Red Hot Lights.” The first beat of the catchy keyboard riff was enough to turn the crowd into one giant party.

When their set was over, it was clear that everyone wanted more. Whistles and yells erupted from around the venue and the band stepped back out onto the stage. They closed with their song “Two High.” Hands shot up all around the room, waving back and forth with two fingers up, a staple for this song at their shows.

Moon Taxi sure know how to put on an action-packed concert. By the end of the night, they had the crowd dancing with strangers and sharing drinks with each other. It was impossible not to feel the positivity that radiated from their music. In other words, if you’re thinking about hitting up a Moon Taxi show, don’t think twice.