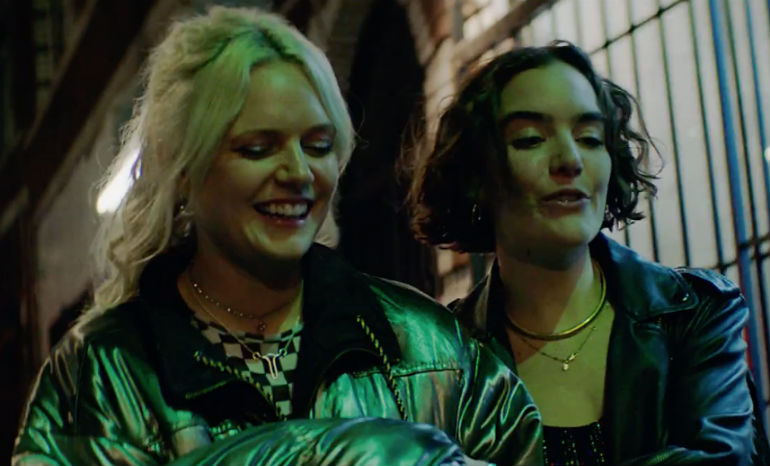 The end of Tove Lo‘s Blue Lips era is here, and she’s wrapping it up with the release of her Blue Lips short film. The film tells an intimate story of female friendship, with friends Ebba (played by Lo) and Kit (played by Ana Coto) going on a fun and flirty road trip to escape heartbreak. Of course, the short film is soundtracked by the Swedish pop star’s very own music, and the script was co-written by Lo and director, Malia James.

With a neon color palette, the film shows two friends who are extremely comfortable with one another; walking around topless, helping each other get dressed, and encouraging each other to pursue flings. After Kit’s love interest dumps her to get back with his girlfriend, Kit and Ebba go on a road trip where they go clubbing and lay by the pool. Ebba is so supportive as Kit hooks up with a girl in the club bathroom. In fact, she’s so supportive that she kisses Kit and tells her she loves her, almost making us forget that there’s another person in the room.

Afterward, Kit and Ebba share a blue bath. Kit worries out loud about losing Ebba to a husband and kids, but it’s clear the two friends are soulmates. After Ebba flirts with Kit’s new crush Guy at a party, the future of their friendship seems to be in jeopardy. Ebba lies to Guy about needing to go home to her mom so that she can go back to snuggle Kit in bed before she wakes up, and all is forgiven.

Tove Lo’s music from Blue Lips (plus “Cool Girl” from Lady Wood) provides the soundtrack to the short film. Sometimes it’s background music at a club, but it’s at full volume during Kit’s roller skating scenes. The music comes into reality when Ebba sings “shivering gold” while driving in the car and “cycles” during the credit sequences.

Blue Lips features the themes of Lady Wood Phase II: strong women, fluid sexuality, shallow relationships and living in the moment. In the film, Tove Lo declares that no matter what, female friendship reigns supreme. Ready to watch the film for yourself? Check it out right HERE: