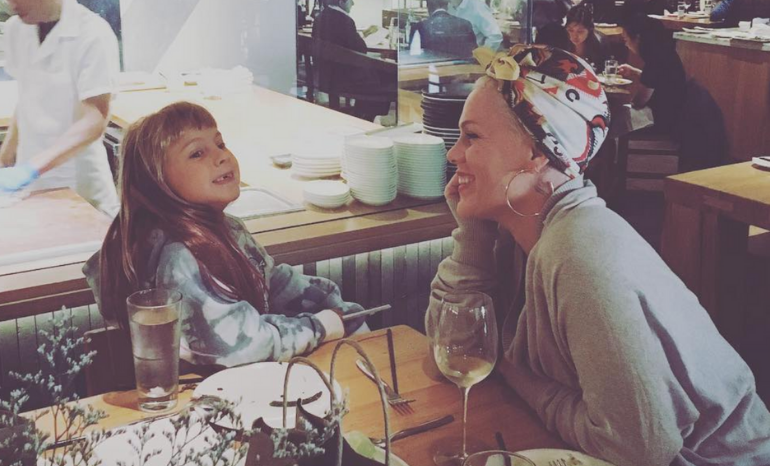 Last week, P!nk debuted her cover of “A Million Dreams” from The Greatest Showman. The song is to be featured on the album The Greatest Showman – Reimagined due out on November 16 via Atlantic Records and is currently up for pre-order. The album will also feature the likes of Panic! at the Disco, Kesha, Sara Bareilles, and Kelly Clarkson.

Willow & I recently had the awesome opportunity to sing together one of our all-time favorite songs #AMillionDreams 💞 Check out the new album The Greatest Showman: Reimagined! And here’s a link to the full video of our recording session https://t.co/AfaRtSdoB0 pic.twitter.com/gthbN6Jrb9

P!nk’s cover follows a lot of the original track, featuring guitars, piano, and an orchestra, along with her vocals. It’s totally fitting that P!nk, with her high-flying live performances, covers a song from a movie that also features some high flying acrobatics. Along with the cover, they released a behind-the-scenes video of the recording process showing P!nk in the studio with her daughter, Willow Sage Hart, age 7, recording the song. P!nk is her daughter’s biggest cheerleader encouraging her to sing with all her heart with her mom.

“I grew up listening to Annie, and no one has done this for me, for my heart, since I was a little girl—and to have her finally have something like this? You made our favorite movie ever,” P!nk tells The Greatest Showman’s director and songwriters about how much this movie, which was released in 2017, has influenced P!nk and her daughter Willow.

The mother-daughter duo’s cover of “A Million Dreams” even got a little bit of love on Twitter from the film’s leading actor Hugh Jackman:

Listen to P!nk’s full cover of “A Million Dreams” HERE:

This is the first new music from P!nk since the release of her 2017 album Beautiful Trauma, for which she’s currently embarked on a world tour that’s going into mid-2019. Tickets and dates for the 2019 leg of P!nk’s ‘Beautiful Trauma’ World Tour can be found here.