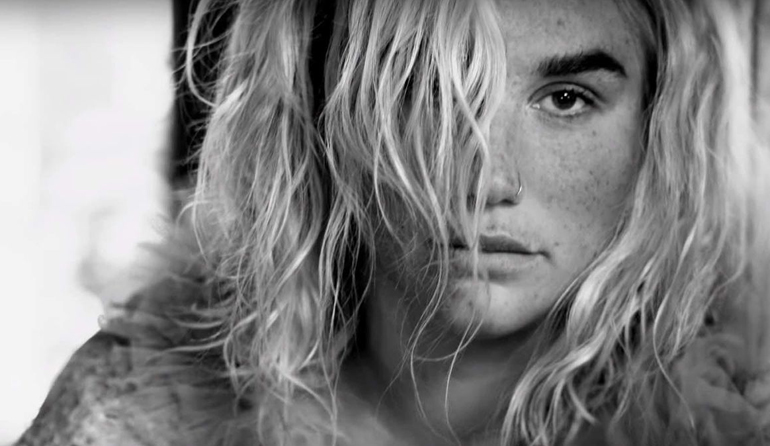 We’re not crying… YOU ARE! Kesha just dropped a brand new music video for the song “Here Comes The Change,” which she wrote for the Ruth Bader Ginsburg biopic, On The Basis of Sex, starring Felicity Jones. The biopic is coming this Christmas, and the song is the inspirational anthem we all need right about now.

🙋‍♀ #OnTheBasisOfSex is a new film about Ruth Bader Ginsburg’s fight for equality and it features my latest song “Here Comes The Change.” In theatres this Christmas! ⭐⭐⭐⭐⭐

Kesha, who usually writes songs from a personal perspective, admitted that she was initially intimidated by the idea of writing about someone who had done so much for gender equality in America, but left the film inspired by how much Ginsburg was able to accomplish. “It reminded me of — and strengthened — my belief that any single person can make lasting change, starting with one small action,” she told Refinery29.

Once known for her epic party anthems, Kesha has transformed from the face of rebellious debauchery to the face of defiant resilience. Her gritty voice holds on to hope in the face of oppression, knowing that the road to personal freedom is long, but it’s worth fighting for anyway. “Here Comes The Change” is a continuation of her Rainbow era, fitting in with its country-tinged sound and its themes of hope, empowerment, survival and taking the high road. Kesha co-wrote the song with Wrabel and Drew Pearson, writers she collaborated with on Rainbow, and the video was directed by Jonas Åkerlund, who also directed the video for “Praying.”

Like Rainbow, “Here Comes The Change” takes a long view of history and personal narrative. In black-and-white footage while dressed in Victorian garb, Kesha maintains hope for liberation, as if to show she is looking at this moment in women’s liberation from the lens of the future; just as women in the early 20th century couldn’t know how far their work would take us, so we in the early 21st cannot yet see the fruits of our labors. She sings about a future child and longs for that child to see a day where we are all equal.

The video begins with the singer setting up her own performance space in an attic while surrounded by photos of civil rights heroes like Nina Simone, Martin Luther King Jr., Harriet Tubman, Frederick Douglass, Gloria Steinem, and RBG herself. By singing for herself while reminding herself of her heroes, she is learning to be her own light.

“Here Comes The Change” echoes the themes of Sam Cooke‘s classic “A Change is Gonna Come,” but is unique in speaking of change as a present tense action. Change is not something Kesha hopes for in the future, but something she chooses to embody. “This is not a phase,” she sings, affirming her commitment to progressing toward equality and personal liberation.

The Rainbow crooner’s performance in the video is interspersed with clips from the movie showing Ginsburg’s fight in the courts for gender equality and ends with a quote from Ginsburg: “There is still work to be done.” We have not yet arrived at a day we can all live and die free, but we can still keep fighting. You can watch the video HERE: