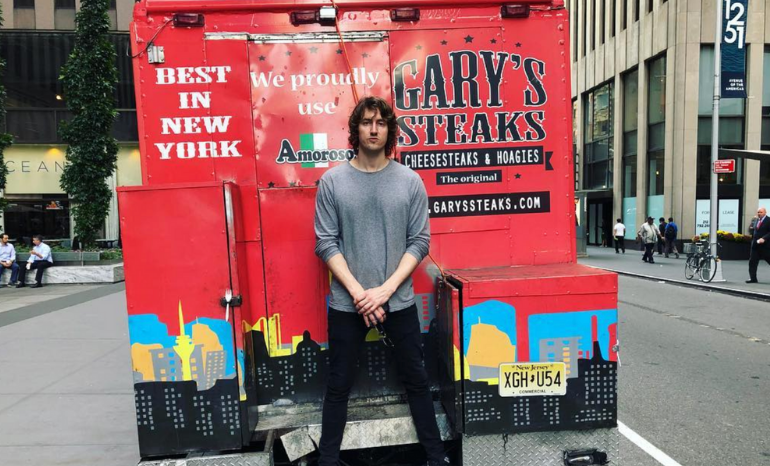 It’s rare enough that a new talent has their song featured on a popular television program, but Australian singer-songwriter Dean Lewis made it big when his music appeared on not one, but FIVE shows! Suits, Greys Anatomy, Valor, Riverdale and Shadowhunters: The Mortal Instruments all featured Lewis’ debut single “Waves.” Since then, he has signed with Island Records and has had major success with his EP Some Kind of Different. Lewis is currently gearing up for the release of his premiere album by touring the world. Before he heads back to Australia, I was lucky enough to stop by his intimate performance at NYC’s Public Arts on Tuesday, October 30.

After walking into the wrong place three times, I finally found the relatively-hidden roped off walkway that led to the basement where Public Arts lives. I felt as if I was heading into an exclusive speakeasy. As soon as I emerged from the staircase, my eyes were greeted with the site of a dim room complete with bright red, velvety curtains and candle-lit leather booths. The space was small, but boy was it packed. Dean Lewis’ laid-back vibe was reflected in his audience. They were relaxed. Instead of pushing each other and crowding the front of the stage, some sat in the leather booths, while some watched the show from the bar in the back, drink in hand.

Dean Lewis stepped out onto the stage in a casual grey long sleeve and sneakers. The audience buzzed with which song he was going to open with, and he broke out into “Lose My Mind.” Clearly a fan favorite—the crowd couldn’t help but sing along to the chorus. With lyrics like, “I only lose my mind when I ain’t got you / How can I win when I’m always bound to lose,” this number set the tone for the rest of the show—it was going to be quite the emotional night filled with love and heartbreak songs.

Lewis acknowledged his persistent songwriting theme before playing “Stay Away,” by stating, “You guys know I write a lot of sad songs. Well, this is new and it’s gonna sound like, not a sad song, but if you listen to the lyrics it actually is sad.”

However, the night wasn’t all somber. First, it was a broken capo, then it was a broken guitar, then it was a tuning issue. Lewis was comical about these small mishaps and handled them well. He has such an awkward-yet-endearing stage presence, that none of those setbacks mattered. In fact, I don’t think the show would have had the same unique charm without them.

The fans at this particular concert were extremely lucky. Besides playing a handful of unreleased music such as “A Place We Knew,” “Hold of Me,” and “Tumble,” he also explained how each song came about and its meaning. Hearing their backstories sure helped me appreciate the raw emotion in each and every piece.

One of the highlights of those stories was how brutally honest he was about his upcoming release, “7 Minutes.” He said this song was written after he was arguing with a girl in London with whom it didn’t work out. He ended the story with, “It all worked out because now I have this song, and the girl isn’t with that other guy anymore.” We feel you, Dean. He also gave some insight into what “Chemicals,” is about. No, it’s not about drugs, but it’s actually about a different addictive substance, “love and boring stuff” (Dean’s words, not mine!) He also mentioned that not many people know, but “Need You Now,” is about simply about wanting more.

Lewis let out a laugh as he told us that the next song was about seeing a message on his ex-girlfriend’s phone. His brother told him to have a drink and put the phone down, and “Be Alright,” was made. A wave of happiness rushed over the audience—we were all waiting for this one. Lewis sat down, solo, at his keyboard and began to play the hit. Everyone was mesmerized by his strong, heartfelt vocals. For one section of the song, Lewis moved the microphone aside and just sang straight to the venue. That was indescribable. It was as if we were all under a spell by his vulnerability.

Tackling love songs as an artist in 2018 can be a difficult thing. Dean Lewis definitely succeeds. His music goes much deeper than surface level and speaks to various emotions that resonate with fans around the world. Dean, you’re going places.