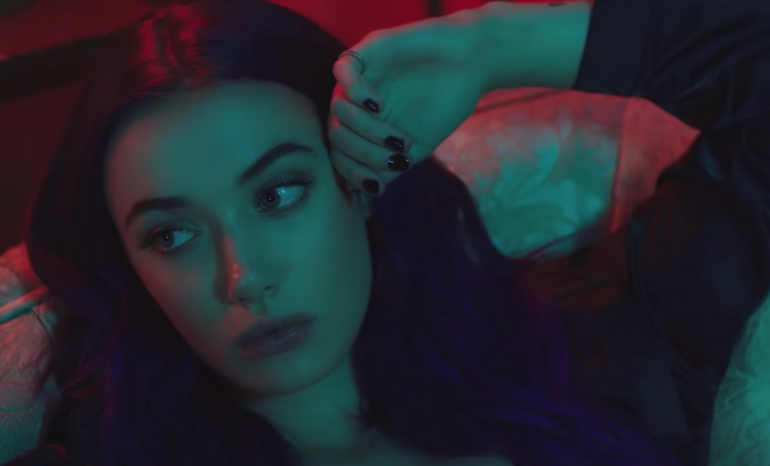 Last week, singer-songwriter Olivia O’Brien released her new music video for her latest single “I Don’t Exist,” where she battles depressive feelings of loneliness. At only 18 years old, O’Brien has gained a great deal of fame between her singles, EP, and collaborations featuring gnash, G-Eazy, Drew Love, and Jack & Jack. She first emerged into the music scene about two years ago when she collaborated with gnash to create the chart-topping single, “i hate you, i love you.” Just nearly two years later, her music career has gone into full swing!

From the very beginning of her career, O’Brien has been known for her pop style with a dash of emo influence. However, this year O’Brien has completely come out of her shell and become more transparent in her music as well as in the general media. If you follow her on Instagram, you’ll know that she’s made it a goal to be as authentic as she possibly can through her online influence. During her live streams, she often mentions that she has no issue with sharing her personal feelings publicly. She actually thinks that vulnerability should be encouraged because it helps to humanize all of us, including celebrities. This is a common theme in her music that was released this year, which includes “RIP (featuring G-Eazy & Drew Love),” “UDK,” and “I Don’t Exist.”

O’Brien admits to her Instagram followers that “I Don’t Exist” is her favorite video and that she’s super proud of the concept she and her team came up with. The music video itself carries the juxtaposition of being both colorful and melancholy. It begins by panning a dark room to reveal O’Brien laying on the couch, looking absolutely emotionless. As she begins to sing her opening line, “I’ve been doomed from the start,” the directors reveal that O’Brien is actually watching one of her first music videos “Empty,” which was released in early 2017. As she reflects back on her career, she questions if she was ever truly happy. Usually, artists assume that with more success overtime comes more happiness. O’Brien shuts down this expectation as she dwells on the past. She thought she would be happier as her fame grew but still feels empty years later.

O’Brien tells Billboard, “I think this is the first time I’m letting my fans see an even more vulnerable side of myself… I tried to capture the feeling I had when writing the song…feeling like no one acknowledges your existence, or cares that you are there, even when you are surrounded by people.” The video matches up perfectly with her hopeless lyrics and soulful vocals. A majority of the plot reveals O’Brien’s feelings in a very literal way. She is shown as an outsider at a house party in the hills and is literally trapped in a glass box. She has no choice but to sit alone in her misery and observe how much fun everyone else is having.

This scene is very metaphorical to the idea that social media isolates us by showcasing the highlights of people’s lives. To cope with her feelings of solitude, she picks up a camera to in an attempt to document her live feelings of the situation. O’Brien’s actions hint at another controversial topic centered around media and technology. We claim that social media enforces self-comparison and depression, yet we use it as a security blanket during uncomfortable times. Here, O’Brien feels comfort as she talks to her camera. She makes a very bold statement that she feels like everyone is too busy to make time for her, which pushes her into a toxic head space filled with anxiety.

some pics from the video shoot by @adamkeely . i worked really hard on this video w a team of amazing people who also worked very hard (probably way harder than me, let’s be real). it’s my fav video yet and i am so proud of what we made!!!!! thank u @andrew_sandler for directing and to every single person on the team. also special shout out to @poisoneyeliner for not only hair and makeup but also for keeping me sane while filming til 4 am. LINK IN MY BIO!!!!!! go watch this shit

Throughout the entire video, O’Brien utilizes her personal experiences and emotions to visually depict her feelings of derealization. Although the context of “I Don’t Exist” is very dark, the purple-haired pop star manages to pull off the deep concept video flawlessly through her relatable lyricism, colorful aesthetic, and genuine talent.

Pssssssst… Olivia O’Brien’s has confirmed that her upcoming album is deep in the works. To keep up with her new releases, be sure to follow her on Instagram, Twitter, and Spotify!