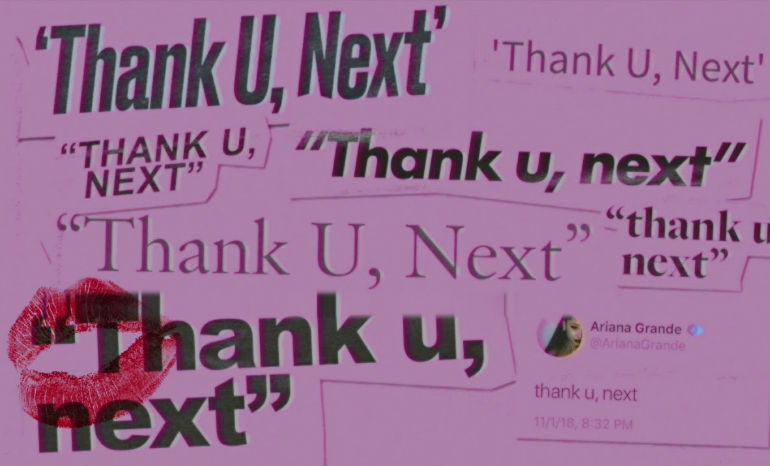 Unless you’ve been living under rock, chances are you’re fully aware of the fact that Ariana Grande‘s been going THROUGH it lately. On top of the tragedy that happened last year at her concert in Manchester, the pop star broke up with her late ex-boyfriend Mac Miller, got engaged to comedian Pete Davidson, mourned the tragic death of Mac, and ultimately called off her engagement with Pete.

Despite the fact that the “God is a Woman” singer has been going through a lot lately, she’s decided not to isolate herself from the world. Instead, she’s dealing with everything the only way she knows how, which is through music. That being said, we’re sure you already know that Ari just dropped yet another new single on Saturday, November 3, titled “Thank U, Next,” which is a shady AF ode to her ex-boyfriends.

Although the 25-year-old could’ve easily released a slow and heartbreaking ballad, she decided to do the exact opposite. In “Thank U, Next,” Ariana proves that no one has to feel bad for her because she’s finally in the healthiest relationship she’s ever been in, and — SPOILER ALERT — it’s with herself.

She sings, “Spend more time with my friends, I ain’t worried ’bout nothin’ // Plus, I met someone else, we havin’ better discussions // I know they say I move on too fast, but this one gon’ last // ‘Cause her name is Ari and I’m so good with that.”

Clearly, this song is a reminder to all the single women out there that they should be grateful for their exes because, whether the relationships ended badly or not, they all taught you something you needed to learn. In the song, Grande specifically calls out her past relationships and what lessons she took from each of them.

“Thought I’d end up with Sean, but he wasn’t a match // Wrote some songs about Ricky, now I listen and laugh // Even almost got married and for Pete, I’m so thankful // Wish I could say “Thank you” to Malcolm ’cause he was an angel.”

She finishes out the song by explaining that marriage is something she only wants to do once, which is probably why things ended between her and Pete. Regardless, we’re so glad she’s living life on her own terms and staying strong through all of the heartbreak.

The song comes just days after Saturday Night Live released a promo for their most recent episode, in which Pete asked musical guest Maggie Rogers if she wanted to get married. He then joked that he was “0 for 3.” Evidently, Ariana was less than pleased with the joke and took to Twitter to throw some serious shade, though it was nothing compared to the shade in this new single.

In since-deleted tweets, the pop star responded to the SNL promo by posting, “for somebody who claims to hate relevancy u sure love clinging to it huh.” She then tweeted, “thank u, next,” which no one even knew would be the title of her next single. Not only is she absolutely brilliant, but honestly, the song is a BOP and we’ll be keeping it on a loop all week long.

If you haven’t yet listened to “Thank U, Next,” listen to it HERE: