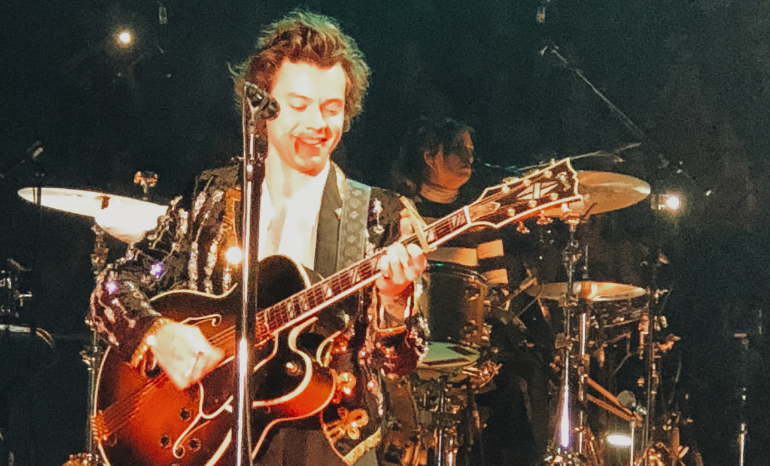 When is Harry Styles not making our dreams come true? This time, Harry interviewed Timothee Chalamet, exceeding the expectations of every fangirl (and casual fan). Harry and Timothee talked about everything from movies to future projects. More importantly, they spoke of the modern definition of masculinity and how both the boys are shaking up the status quo. Harry spoke of how he much more confident he is now being his true self, even when it’s allowing himself to be more feminine. In honor of this interview, we are bringing you the top five times in which Harry inspired us to be our authentic selves.

1. When Harry rocked every colorful and bold fashion trend.

Harry is a fashion legend and not afraid to show us that rocking bold and non-gender-conforming looks is awesome. This is his everyday way of leading by example. If Harry can rock colorful suits and flowy pants, you can pull off anything.

2. When Harry showed us that it is great for men to support women.

He also wants women to support other women. Women are the way of the future. Harry wants to show that it is not weak to encourage women to keep making moves. Harry is a feminist and shows that showing appreciation for strong women doesn’t make you weak. It makes you stronger.

Thank you to all the incredible women paving the way. Happy International Women’s Day. H

3. When Harry gave a love is love speech at a One Direction concert.

Harry supports his friends, fans, and family no matter what their sexual orientation is. Along with promoting loving who you want to love, Harry also encourages his fans to treat each other with kindness. Kindness towards others’ differences is important and Harry wants everyone to love who they want while showing love, empathy, and understanding towards others.

Harry once said in an interview Rolling Stone, “Who’s to say that young girls who like pop music–short for popular, right–have worse musical taste than a 30-year-old hipster guy? That’s not up to you to say. Music is something that’s always changing. There’s no goal posts. Young girls like the Beatles. You gonna tell me they’re not serious? How can you say young girls don’t get it? They’re our future. Our future doctors, lawyers, mothers, presidents, they kind of keep the world going. Teenage-girl fans – they don’t lie. If they like you, they’re there. They don’t act ‘too cool.’ They like you, and they tell you. Which is sick.” Harry knows the future is female and teen girls who are passionate about music shouldn’t be ashamed of what they love.

5. When Harry inspired young, male fans to paint their nails.

With all the talk of Harry challenging the definition of masculinity, he continues to lead by example. Last year a tweet went viral of a sister sharing her brother’s painted nails inspired by Harry. Harry is now showing younger generations that it is great to be themselves, even if it might not considered the “norm.”

so my brother was thinking the same and I surprised him with a little manicure session 😄 he loved it ❤️ pic.twitter.com/Kb3dxhLIV4

Overall, Harry Styles is making a positive impact on the current generation and those to come. He has been pushing the ways of traditional thinking more and more in the last few years. Harry stands for love, equality, kindness, and being comfortable in your own skin. We hope Harry continues to inspire others and help make the world a more accepting place.