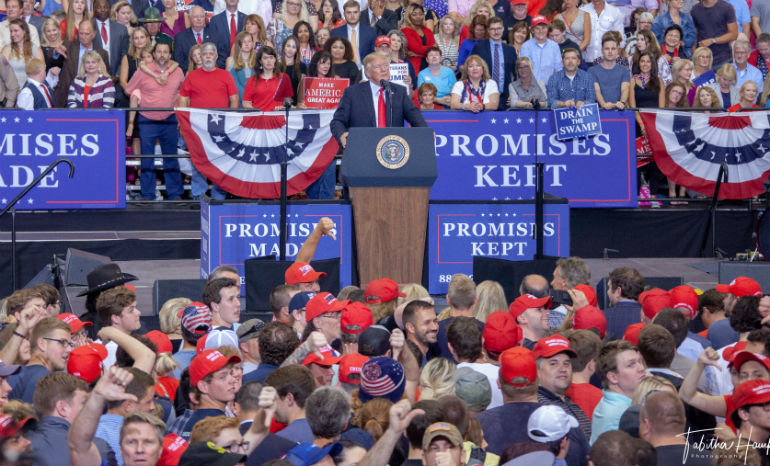 Dating back to the announcement of his presidential campaign in 2015, Donald Trump has been slammed by artists who disapprove of their music being played at his political rallies. In the last two months, three popular musicians sent cease-and-desist letters to DJT, demanding his campaign team to stop using their songs and involving them in his political agenda.

Wondering which artist clapped back at the president? We’ve got ’em all right here:

Young was notably the first artist to publicly condemn Trump for the unauthorized usage of his music at a political event. The singer’s “Rockin’ in the Free World” was employed as background music during Trump’s official presidential campaign announcement back in 2016. In response, Young’s record label put out a statement saying that Trump was unauthorized to use his music and asserted, “Neil Young, a Canadian citizen, is a supporter of Bernie Sanders for President of the United States of America.”

In the back and forth that followed, Trump’s campaign team challenged the legality of the matter, stating that they paid for and obtained the rights to use Young’s music on the campaign trail. However, Young continued to stress his disapproval of the future president, and though Donnie maintained the rights to play “Rockin’ in the Free World,” the song was removed from the campaign playlist.

The British songstress made her opinion of the future president clear when she censured the usage of her songs “Skyfall” and “Rolling in the Deep,” among others, at Trump’s 2016 campaign rallies. The singer was made aware of the situation through a number of tweets from her fans, one asking, “Does Adele know that Donald Trump plays her songs at his rallies? I have a feeling she would not be pleased.” Not only did Adele then publicly endorse Hillary Clinton, but her spokesperson put out a supporting statement saying, “Adele has not given permission for her music to be used for any political campaigning.”

Following the news that “Purple Rain” had been played at one of Trump’s pre-midterm election rallies last month, Prince’s half-brother, Omarr Baker, issued a statement demanding that Trump and the White House stop using the song.

The statement said, “The Prince Estate has never given permission to President Trump or The White House to use Prince’s songs and have requested that they cease all use immediately.” It’s unclear whether the Prince estate actually filed a cease-and-desist notice, and Trump’s campaign team has yet to respond or comment.

On October 27, 2018, just hours after a tragic anti-Semitic mass shooting at a synagogue in Pittsburgh, Pennsylvania, Pharrell’s “Happy” played at a Trump rally in Indiana. Many people, including the singer, were absolutely traumatized by the tone-deaf choice of song, citing the inappropriateness of the cheerful tune while the nation mourned the loss of 11 innocent lives. Pharrell responded two days later with a cease-and-desist letter and statement from his lawyer, Howard King.

“On the day of the mass murder of 11 human beings at the hands of a deranged ‘nationalist,’ you played his song ‘Happy’ to a crowd at a political event in Indiana. There was nothing ‘happy’ about the tragedy inflicted upon our country on Saturday and no permission was granted for your use of this song for this purpose. Pharrell has not, and will not, grant you permission to publicly perform or otherwise broadcast or disseminate any of his music.” WOW.

You know things aren’t good when RiRi herself wants the music to stop. As the most recent musician to add her name to the list, Rihanna expressed her displeasure via twitter after learning “Don’t Stop the Music” was played at one of Trump’s rallies. She responded to a tweet from the White House Bureau Chief at The Washington Post, Philip Rucker:

Not for much longer…me nor my people would ever be at or around one of those tragic rallies, so thanks for the heads up philip! https://t.co/dRgRi06GrJ

Rihanna’s lawyer followed up with a cease-and-desist a few days later stating, “As you are or should be aware, Ms. Fenty has not provided her consent to Mr. Trump to use her music. Such use is therefore improper.”

Along with these five, Steven Tyler, R.E.M, Dee Snider of Twisted Sister,  Elton John, The Rolling Stones, Queen, and more have put out similar statements expressing their disinterest in being affiliated with Trump. The list has grown steadily over the past two years, and looks like it’s only going to get longer as the Trump presidency continues. We’re glad these artists are using their platforms to stand up for what they believe in and what their music represents.