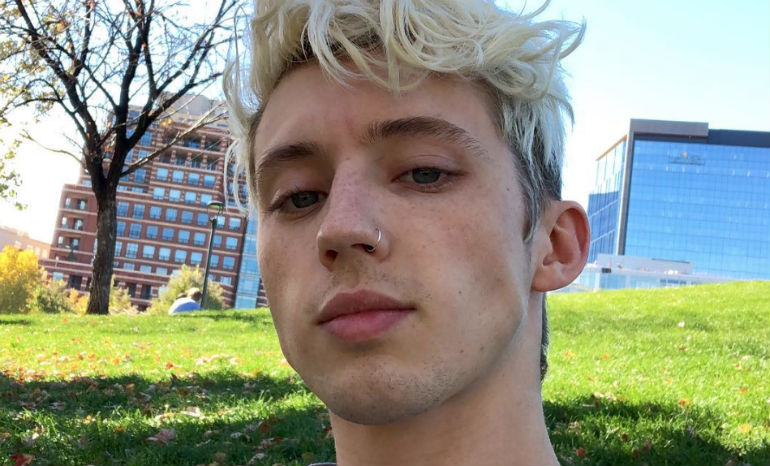 Troye Sivan just wrapped his second-ever headlining tour for his sophomore album, Bloom, and it seems like he’s picked up a new hobby with his time off!

Sivan was challenged by Pandora to create Bloom-inspired paintings that capture the sound and feel of his album. The three paintings, entitled “Blue Sky,” “Animal” and “Abstract,” are to be auctioned off on eBay with the proceeds going to The Ally Coalition, a non-profit organization that fights for LGBTQ+ equality.

In the video of his painting session with Pandora, Sivan admits, “Quick disclaimer: I’ve never painted anything in my entire life.” However, that didn’t stop the pop star from creating some beautiful pieces of art.

Sivan begins by covering an entire canvas in blue and flecking yellow paint across the “night sky,” as he calls it.

As he paces the art studio, Sivan explains the relationship between his music and visual art.

“I definitely think very visually when I’m writing music,” he says. “This whole album in my head takes place in these really dimly lit, night-time, artificial environments. And then ‘Animal’ is like the complete opposite.” The singer’s “Animal” painting reflects how he describes the song to sound — a mix of greens, browns, and earth tones, with a bright pink streak down the center.

After completing his final painting, Sivan steps back to look at the finished product and says, “I would totally just put text over this and make it my album cover.”

The paintings are currently up for auction, and fans have already brought the bidding past $1,000 for two out of the three of the pieces! If you want to join in for your chance to own an original Troye Sivan painting and to contribute to a great cause, check out The Ally Coalition’s eBay page before November 17th. Happy bidding!