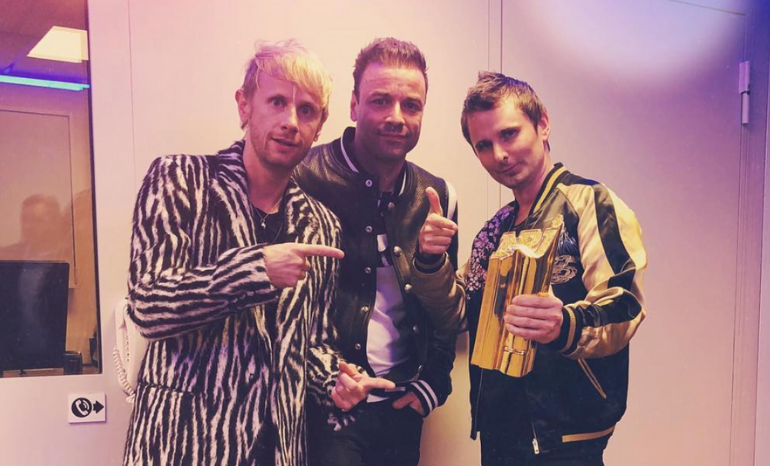 Ready to dive into a nostalgic pop-rock video game? That’s what Muse brings to the table with their latest LP Simulation Theory. This new project sees Muse straying away from some of their classic rock themes. Instead, they have bombarded listeners with this new synth-filled collection of tracks. It feels like a natural progression from the 2015 release Drones. At the same time, it also sounds like a huge leap away from their established sound.

It’s as if the band is trying their best to create a new reality for its listeners. The album is filled with nostalgic sounds from their older projects. But it’s also oversaturated with electronic trends, pushing it into a direction towards the mainstream. Although there really is nothing mainstream about this album, Simulation Theory. The album does, however, throw out political themes and ideas of escapism, which everyone feels from time to time.

The simulation begins with “Algorithm” an overwhelming, epic track calling for action from those listening. The album immediately sounds more electronic and pop-inspired than what people were expecting of Muse, but it doesn’t lack the immensity that many of their older tracks have had.

As the album continues with “The Dark Side,” the hollow anti-political lyrics are apparent. Considered classic themes for Muse, it feels as though they are revisiting themes they’ve discussed in albums like Black Holes and Revelations. In this album, they are just twisting them to fit the progression of the technology-addicted world we have turned into.

NEW SHOW: To celebrate the release of #SimulationTheory, Muse are performing an intimate set at the @iHeartRadio Theater in New York City on Wednesday, November 14th. The show will be broadcasted live at 7p ET at youtube.com/iHeartRadio For a chance to win a pair of tickets, click the link in the Story or visit muse.mu. New album out 9 November. #iHeartMuse // 📷: @hpvv

As the album continues on, it is musically complex and intriguing, something that the band members are experts at. Matt Bellamy never fails to use his talents to his full ability. The band has also succeeded in creating a listening experience that is epic and enjoyable. This is one of the first albums where Muse has thrown producers into the mix on their music. Some of the credits include Rich Costye, Mike Elizondo, Shellback and Timbaland. The influence is clear in tracks like “Get Up in Fight” that feature vocals from Tove Lo.

Even though the album is very electronically influenced, it has a fun 80s nostalgia. It’s hard to deny the fact that some of “Dig Down” sounds like a techno synth rock rendition of George Michael’s “Freedom.”

The band has created a synth space rock vibe that paints the image of an 80s clad rebel flying away in a VR spaceship. The themes of escaping the societal reality that we live in are well and alive throughout this album. The want to get up and fight about issues that have yet to become resolved is called out to listeners in many of their tracks. “Propaganda” is just one example of this. Blending the lines between romance and hatred for the world, there’s a sick love story embedded in this synth-filled track. “I’m the ocean, you’re an oil slick/ Now I’m choking on your thought pollution”

Some of the tracks feel like they’re trying to bring us back to more simple times. Musically speaking, some of the tracks push me back to the good old “Knights of Cydonia” and “Origin of Symmetry” days. Reversely, the album really is a deviation from the heavy rock sound on which the band has built its career. It seems that the band has begun to heavily rely on pop influence to push their tracks towards a more mainstream listener.

As a new listener, I’m unsure of what I would think of an album like this. Arguably there would be tracks like “Get Up and Fight” and “Something Human” that would be easily digestible. As a longtime fan, it’s difficult to see the pop-nostalgia development and not have a bit of a distaste for it. However, after a couple of listens in, it becomes much more palatable and there are a few tracks like “Propaganda” and “The Dark Side” that I can really get into and see the old rock band I’ve enjoyed for years. Listen to Simulation Theory here.

One thought on “Muse’s New Album, Simulation Theory, is Like a Nostalgic Pop-Rock Video Game”