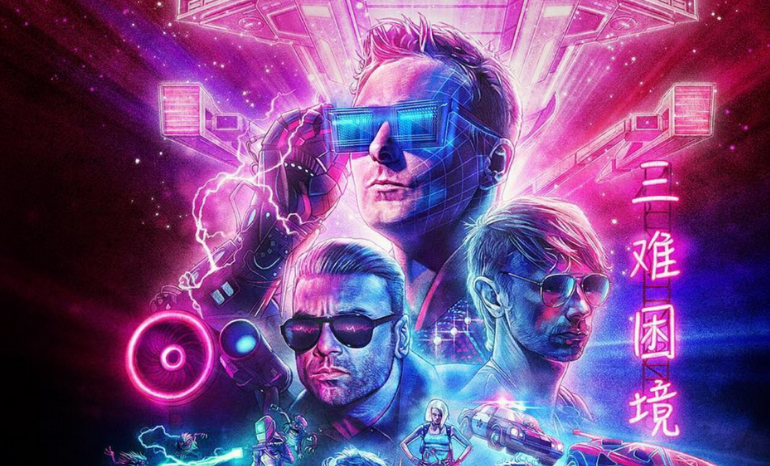 English rock band Muse, comprised of Matt Bellamy, Dominic Howard and Chris Wolstenholme, is a group that typically headlines festivals and sells out stadiums worldwide. On Wednesday, November 14, they underwent a complete change in scenery. The iHeartRadio Theater in NYC, a less than 300-person capacity venue, hosted the official release party for Muse’s eighth full-length studio album, Simulation Theory. I had the once-in-a-lifetime opportunity to attend the show, among friends, family, industry professionals, and quite a few very lucky fans.

Doors to the private party were scheduled to open at 6 p.m. I arrived half an hour early to scope out the fan base, and a huge line was already forming outside the theater. Despite the extremely cold weather, everyone shivered together while chatting about the best song off the new album. The general consensus: “The Dark Side.” This happened to be some’s tenth time seeing the band and other’s first.

“I’m really excited; I’ve seen them four times. The first time was back in high school, and I recently saw them at Central Park last summer. They do a lot of these fun things where they perform impromptu shows in interesting places.” said fan John Marcucci. The only way to attend the event was through a contest run by iHeart, where fans were picked at random after filling out a form. For fans that didn’t win, the party was live streamed through iHeartRadio’s official Youtube Channel.

After piling into the theater, I would describe it more as a studio rather than a concert venue. The room was small, surrounded by cameras and recording equipment, and the walls glowed with iHeart displays. I ended up standing on the side next to two very young boys, around three and eight years old, accompanied by their parents. What lucky kids. I wish my first concert was an intimate Muse show.

Since this was an album release event, it was thought that the setlist would be Simulation Theory heavy. To the crowd’s surprise, the trio opened with 2006’s “Supermassive Black Hole” for the first time since 2013. Smiles emerged across the room as they realized this would be a memorable night filled with both classics and new tracks. Songs performed from the new album included “Pressure,” “Thought Contagion,” “Something Human,” and “The Dark Side.”

Muse is known for teasing the audience with intros to alternate songs, and this performance was no exception. Prior to playing “Something Human,” the intro to “Falling Away With You” sampled, and frontman Matt Bellamy laughed as a fan shouted “YES. PLAY THAT ONE!” That wasn’t the only shout out of the night. Before playing throwback, “Starlight,” someone let out, “This is the greatest night of my life,” and I gotta say, I do not disagree with that statement. Another favorite of mine would be when a fan asked Bellamy how his sheep was doing (only mega-fans will relate).

After an impressive harmonica solo by Wolstenholme, Muse closed with “Knights of Cydonia,” a song I only dreamed of hearing live after years of losing Guitar Hero battles to my cousins and sister. I put down my phone for a moment and looked around the room as everyone completely rocked out to the iconic guitar riff. This is what music is all about. This wasn’t just any concert. This was a room filled to the max with mega-fans who knew every word to every song. I took it all in as I realized this intimate moment is a memory that I, and the rest of the audience, will never forget.

The band participated in a short interview following the show. They spoke about everything from how the album’s retro-tech vibe was inspired by the band and Bellamy’s son’s love of gaming, to the process of recording the deluxe version of “Pressure” with the UCLA Marching Band. Because of how heavily tech-driven the past few tours have been (Chris was knocked out by a drone on the last one), the band decided to take a more “human” approach this time around with a whole crew of people. Think more instrumentation and percussion-influenced.

Us New Yorkers were especially excited about the announcement that they will be adding Manhattan and Brooklyn dates to their tour. “We’re not allowed to say when for some legal reason, but we are,” Bellamy said. Surprise! They’re also working on a special package that will include remastered versions of the first two albums, a book with really old photos and a story of the band’s history, as well as some “really bad demos as well.” A release date for this package has yet to be announced, but stay tuned!

iHeartRadio sure knows how to throw an entertaining party, and Muse does an unmatched job of making you feel like you’re the only fan in the room. Listen to Simulation Theory in its entirety on all streaming services today, and check out the full setlist from the release party below. Sad you missed this show? Don’t be! Muse will be performing during the 2019 iHeartRadio ALTer EGO concert in January, and you can also buy tickets to the Simulation Theory World Tour now.