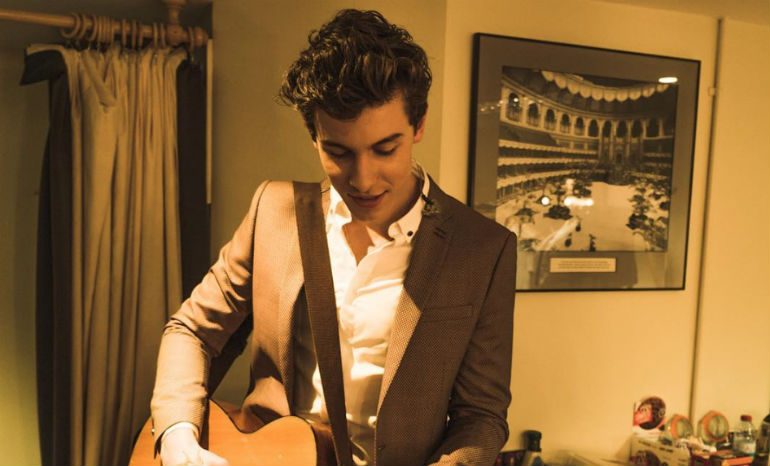 This past week, Shawn Mendes was the featured guest on Guy Raz‘s new Spotify Studios series, The Rewind. In this series, Raz sits down with various artists to discuss their careers from the very beginning, and on Shawn’s episode, he dropped some very interesting information.

During his interview, the “Treat You Better” crooner spoke about how his curiosity of guitars started with his father’s beat-up acoustic. The instrument was a gift from a friend that was just lying around their house in Pickering, Ontario. After messing around on that for a few weeks at just 13 years old, Shawn and his dad made a deal. The deal was that if he learned how to play guitar after a few weeks on a rental, his dad would buy him one of his own. Of course, you can imagine how that ended.

Once Shawn got his first guitar, he learned how to play through YouTube. He would learn specific songs, searching phrases like, “How To Play ‘The A Team’ by Ed Sheeran.” He mentioned that his career started shortly after that with a short 6.5 second clip he posted in 2013. The clip was of himself covering Justin Bieber‘s “As Long As You Love Me” on the now retired social media app, Vine.

After that clip went viral, the “Lost in Japan” singer continued to build up thousands of followers on the app, which led to the record deal he later got with Universal Music Group’s Island Records. Not even two years after he posted that first cover to Vine, Shawn was able to score himself a spot as the opener for Taylor Swift‘s 1989 tour.

The heartthrob then went on to talk about how, although he has a lot of doubts, he pushes through them. On radio days when he gets tired or has thousands of fans wanting photos with him, he always thinks back to the advice he received from Ed Sheeran. Ed told him to “never say no to anyone because you need to work harder than every other person,” and it’s advice he follows to this day.

We’re not sure about you, but we can’t wait for Shawn’s next album. We also couldn’t be more proud of how much he has grown as an artist over the years, and we’re looking forward to whatever he has up his sleeve next.

If you haven’t heard the interview yet, you can listen to it here: