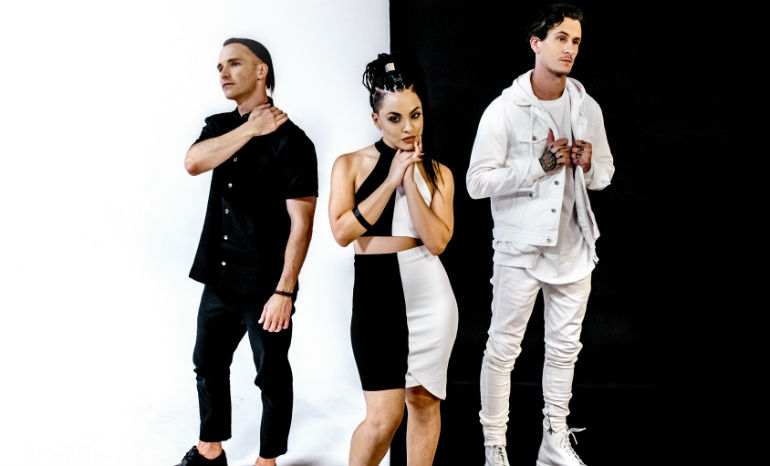 We recently had the opportunity to interview VERIDIA, a Nashville-based pop/rock/electronic band consisting of lead vocalist Deena Jakoub, drummer Kyle Levy, and guitarist Brandon Brown. The band just released their new album, The Beast You Feed, along with their single, “I Won’t Stay Down.” VERIDIA has made a name for themselves by previously touring with Evanescence, and Amy Lee even contributed to their new album! Check out our interview with the band’s lead vocalist, Deena, below!

You recently released the single, “I Won’t Stay Down,” which has a powerful premise behind it. Can you tell us a little bit about the track and what it means to you?

Yes, “I Won’t Stay Down” is our anthem! It’s right in the middle of our album because it’s the turning point. The first half of the album touches on subjects of heartbreak, loss, and other tragedies that chain us down. I decided I had written enough about my defeating circumstances and this time, the story embedded was about someone I loved that was hurting so much he tried to commit suicide. I needed a song that would not only empower me to walk through my own adversities but to build a strength that would help lift those in the midst of theirs. I am done being the victim, I am so ready to be the victor!

And, in this specific song, I wanted it to be a platform for awareness and action. As family and friends of those suffering from mental illness or injury, we need to educate ourselves and on a broader scale. We need better and mandatory Crisis Intervention Training for all of our first responders.

How would you say your music has evolved in the last few years since the release of you debut EP Inseparable back in 2014?

There’s no doubt that the music has evolved over the past few years. We’ve been experimenting musically since day one. We put out a few songs at a time on the EPs while still developing and honing in on the sound. That music allowed us to begin touring and connecting with people on the road, which is where our hearts have always been. On this album, you’ll hear some musical nods to some of our favorite older songs, like “Disconnected,” “Pretty Lies,” and “Still Breathing.” The blend of real instruments with electronics is still at the core of the sound. Hopefully, we never stop growing as songwriters and continuing to be influenced by new things every day.

We’re in a place where we’ve been able to find ways to incorporate the eclectic genres of music that have inspired us as individuals, and it was so exciting to be purposeful about creating a unique soundscape for each individual song. They all play a specific role and are crafted musically to make you feel the emotion behind the lyrics.

Your new album The Beast You Feed was just released. Can you tell us a little bit about the writing process for the album?

It started about two years ago, after being inspired by an ink artist’s Instagram post of his take on the Two Wolves proverb. I had that imagery and concept in the back of mind as we wrote. We just kept writing as often as possible, and I lyrically wrote through every emotion I had been dealing with, even through all the stages of grief. I gave myself permission to feel, working hard to be vulnerable enough to express my own struggles. Eventually,  my own interpretation of that concept formed into The Beast You Feed.

The first half of the album touches on some darker issues and experiences, and the second half celebrates the incredible relationships in my life and setting intentions of who I wanted to be.

How does the song creation process usually go for you? Do you start writing lyrics first or the melody? Do you write together in the studio or separately?

For me, a lot of times, it starts with an interesting word or title and an emotion, sometimes short poems. I like to start with a beat and organically build a melody around that, but we also love collaborating with other writers and producers, and we continue developing the soundscape as a group in the studio.

What is one takeaway message that you want fans and listeners to get from The Beast You Feed?

When someone listens to this album, I hope that they hear and feel a full spectrum of emotions that help them walk through their circumstances and maybe inspire them to let go of the past, not worry so much about the future, and to take every opportunity to live fully in our gifted moment. I am trying so hard to live that way. It’s brought me so much happiness and so many fulfilling relationships!

Now that the album is out, are you planning a tour in support of the album?

Our goal is to hit the road hard in 2019! We’re working on tour plans now and seeking the right opportunity.

For those who don’t know, Amy Lee from Evanescence picked you to join them on tour back in 2016. Can you tell us how that came about and how your relationship with Amy and Evanescence has evolved since then?

Yes, everyone in Evanescence is so rad! The story actually started a year before that. One of their first shows back on the road in 2015 was in my hometown, Dallas, and our name was thrown into the hat as a potential opener because of our strong fan base there. They felt like instant family—no ego at all—and we loved getting to know them and developing some truly special relationships. That show and the friendships we made eventually led to our tour together in 2016.

When you’re not on the road or in the studio, what do you all like to do for fun outside of the band? Does anyone have any quirky hobbies?

If traveling and unusually delicious food are good hobbies, then those are Brandon’s. He always has us braving new ethnic cuisines on the road!

I just love any opportunity to create, so even when I am at home, I am still planning visual art that corresponds with what VERIDIA releases. I love styling and makeup and having some creative partners in town that I get to be weird with. The last shoot I did a week ago for our song “Feed the Animal,” my friend and makeup artist, Anais Shiba and I molded a wolf’s jaw to come out of my chest—so much scar wax and a touch of fake blood. ’Tis the season!