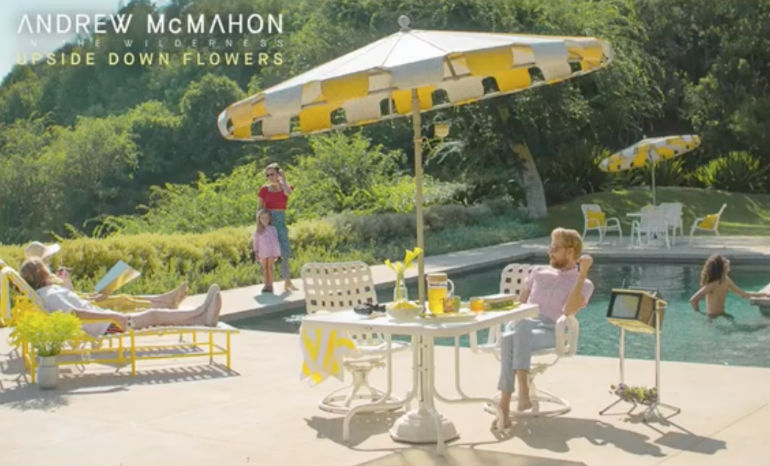 Andrew McMahon in the Wilderness released his third studio album last week called Upside Down Flowers via Fantasy Records. The album gives a nice dose of nostalgia to old and new fans alike. Andrew McMahon reminisces on his Jack’s Mannequin and Something Corporate days throughout this album, and it also touches on his life with a family and what it was like growing up in Southern California.

The album opens with “Teenage Rockstars,” a slow single that reminisces on his Something Corporate days. Inevitably, it leaves old-school Andrew McMahon fans missing that iconic moment of his career, especially since he sings about what it was like starting off small and gradually becoming a successful band.

The album is much different than his 2017 release, Zombies On Broadway, shifting from an electro-pop sound to a stripped down LP. That said, he does seem to be channeling some of his old sound on Upside Down Flowers, and in many ways it seems like a more modern take on what he’s been doing all along. The good thing is, it works!

Andrew also throws it even further back with the second track (and second single), “Ohio,” which is all about his family leaving Ohio and moving to SoCal. He sings about how big of a change that was, where exactly he established his career, and how he came to know that he’d find more success on the West Coast than he would’ve back in Ohio. It’s actually really interesting!

Along with the album, Andrew also dropped the music video for another single called “Paper Rain.” Check it out:

For the fans out there, we think we should mention that McMahon will also embark on tour early next year with Flor and Grizfolk. His setlist will likely include a combination of Something Corporate, Jack’s Mannequin, and Andrew McMahon in the Wilderness, so the nostalgia will be SO real! Dates and tickets can be found on his website. Don’t miss it!