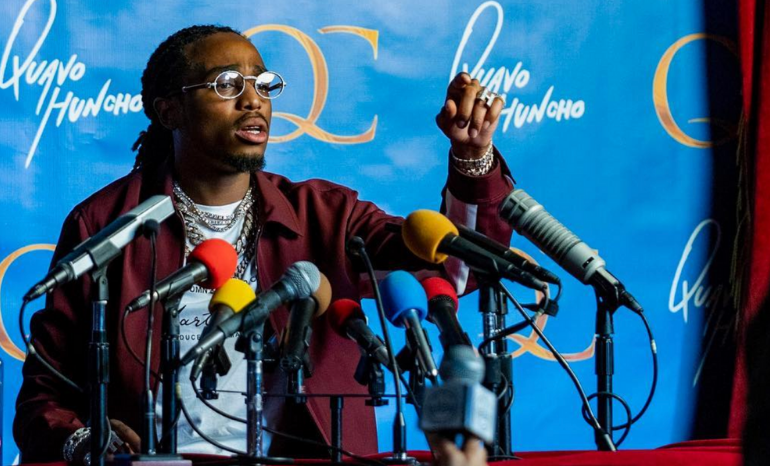 Migos’ member Quavo recently his video for “How Bout That?” last week, and it’s giving us some major Space Jam feels. This track is from his debut solo album Quavo Huncho. This is the second video produced off of Quavo’s solo album, with the first being “Bubble Gum.”  This video, directed by Kid Studio and Quavo himself, took the rapper to the basketball court, as it seems to be inspired by the popular 90’s movie, >Space Jam.

The opening scene is one of despair as the basketball team seems defeated in the locker room during half time. Quavo takes on the role of basketball coach as he raps a pep talk before they head into the second half of the game. That’s when the magic happens. Literally. The players in the video can be seen drinking a special drink labeled “Quavo’s Secret Stuff,” as a basketball swirls with magic.

These are almost direct references to the hit movie starring Michael Jordan and the Looney Tunes characters. Of course, unlike the movie, this game was on a street basketball court, and with the help of some “magic,” the team defeats its opponents but not before Quavo dunks the ball so hard that the backboard of the hoop shatters.

After their victory, the video moves to a shot of the post-game press conference where Quavo is asked how he plans on celebrating the win. Quavo simply responds, “Champagne rosé.” Immediately, the video moves on to its next scene, where Quavo and the team are seen celebrating their victory as they turn the court into one huge party. Of course, in true Migos fashion, Takeoff and Offset made multiple cameos throughout the visuals of the track!

Check out the music video below and let us know what you think in the comments or tweet us @soundigest!