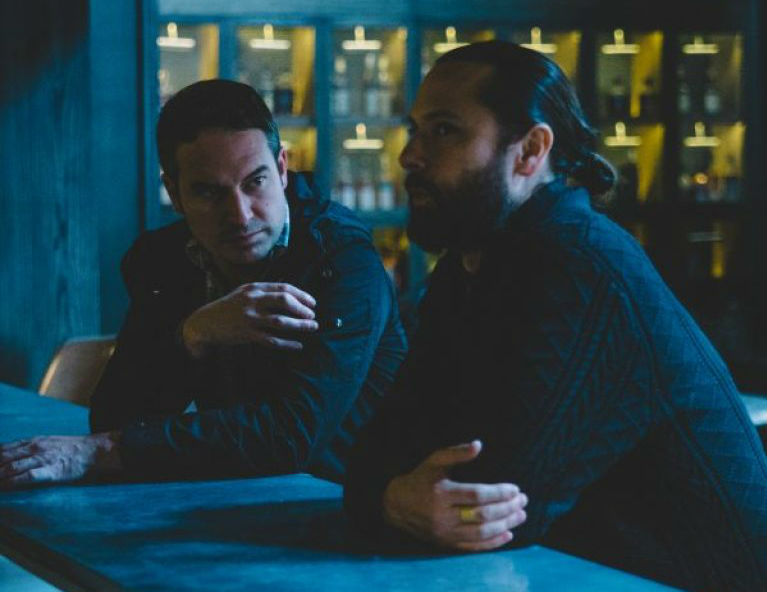 Almost 20 years ago, Multisensory Aesthetic Experience was born. The band, more commonly known as Mae, has brought more than just emo music to this world. They have brought a full roundabout immersive musical experience to their fans. Today, their self-titled album, which their first album in over 10 years, is released.

A few weeks ago, we sat down with Dave Elkin (vocals/guitar) and Jacob Marshall (drums) to discuss the new music, what Mae Day is and more. Be sure to check out Multisensory Aesthetic Experience now!

So you guys haven’t released music in really ten years. You’re kind of coming back in full force. How does it feel to finally get all of this new music out here? You’re releasing an EP & the album’s coming out next month—how do you feel?

Jacob: It’s exciting. It’s very exciting. I think I would say, when you’re kind of in this phase where the record is finished and we’re the only ones who have gotten to hear it, there’s a magic in that. You’ve got a limited shelf life because once it comes out to the world, it becomes the world, and that part of the process is wonderful because it’s reflected back to us from the stories and experiences that other people are having with it. It brings on a whole new life, but right now [there] is this kind of limited little window where nobody knows what’s coming except us.

We internally feel like this is the best [tour] we’ve ever done as a band by far, so that feels really good. Just like so many little things, we’re so excited for people to discover [things] in this, too, that even go above and beyond the music and lyrics into the art and how it was created and new ways of people even experiencing that through the virtual reality and pulling people inside of it. We’re working with some of the top neuroscientists in the world on Haptics, which is a vest that translates music into vibrations through the body, and developing fragrances that accompany the music. So it’s just a way of placing the whole body into this work, and it’s not just sound now—it’s also all of these other senses. We’re a band that’s called Multisensory Aesthetic Experience, [with] an album that’s called Multisensory Aesthetic Experience, and it’s our first real chance to showcase what we’ve been dreaming of since the very beginning.

What inspired you guys to go this route of more than just lyrics and instruments?

Dave: We’ve painted with many different brushes, and it’s all metaphorical already, you know. We’ve done the DIY route with the 3D glasses. You know, we’ve made it rainstorm in a venue while we played it solo [with] wild guitar. I got to play a [floor tom] during this moment, and it got windy and everything. We did those kinds of things, and we have the opportunities—friends and super creative people that we love that have encouraged us, I think. We feel like we’ve been riding on this current for a while, even though we haven’t been doing it as a band so intentionally. This album is like this beginning again [feeling] and is getting back to the route—a self-titled album, you know. Call it that and give it that opportunity.

It’s more about when the dreams and the goals are like definitions of what we think would be success, or feel like in our hearts or in our souls, hit the mark the best we could. That’s what we’ve taken the time to create for the album, and yet, there are more ways to journey through the album, including your own sequence, your own sort of path, you know, if that’s what you want to do. We say open up until you know there’s more than either. In a song, we’re putting that all over anywhere we can with our art and then with our conversation and our hopes, you know, and it’s all kind of melding right now, and again, it’s exciting.

So all of that kind of morphed into the Mae Day [event]. Can you explain what Mae Day is?

Jacob: Sure. Between the LPs we put out about a decade apart—Singularity was the last full studio record and that came out in 2007—we released a ton of music, actually, but we compiled them into three separate EPs that were all a lot longer than other albums because we had these instrumental journeys we’d take people on. Those albums are called Morning, Afternoon, and Evening. And for a long time, we’ve imagined experiences that are longer than a typical concert would be, where we could even interweave conversations and [meals] and a space for a different kind of interaction that a typical concert setting allows for because we love that. We’ve done 1,600 concerts in our career, and we wanna mess with the formula a little bit.

There’s only so many times you can do the same thing. And for us, what we’re interested in are these gatherings where these ideas are explored and art is a conduit for new ways of understanding something to someone else’s perspective. The most interesting moment globally and culturally is where there’s a renaissance happening. The renaissance is being fueled by a lot of different things. Those were primarily conversations that weren’t previously possible for a variety of reasons. It’s expensive to cross national boundaries, so we would have this whole kind of proliferation of social media allowing people to connect in ways that weren’t possible before. For us, we’re kind of stepping back and looking at all of this and saying, “What is the most effective way we can look at things like polarization or disconnection as a result of these kinds of things getting mashed together,” and maybe offer a different perspective.

For us, that’s really what this record is about—how we, in our own ways, have journeyed into space, having a different perspective and feeling open to that because of the uncertainty that comes from stepping into something unknown. It can be terrifying. So we want to, in this sense, create a soundtrack that lets people in on the journey we’ve taken and extend that invitation to others as well. And the format for that isn’t necessarily a concert. It’s actually a gathering where people can both hear what we’re putting out there and digest that, ask questions and be engaged in sharing their own story, too. So to be able to do that over [food], over a listening party, to have that acoustic performance as a part of that, and to end in that experience with the virtual reality and the fragrance and the Haptics. Give somebody a bodied experience.

That’s cool. So you’re bringing that out on some tour dates. How is the tour actually going in general?

Jacob: It has been awesome. I think from my perspective it’s one of those things that gets better and better as it’s going. When you live in different places—I lived in Brooklyn, Dave is in Nashville, Zach is in Virginia—we don’t get to practice like typical bands might. So when we do get together, it’s this beautiful kind of combination, like a family reunion and a creative release, because that stuff is inspired by other conversations, or films, or bands, or jam sessions, or whatever, and when you come back together you’re bringing all of that inspiration into this context that is very much like your family in the best way.

Is there anything else you want to add?

Dave: I would say personally, I think that we, as people naturally, kind of want to put things into boxes to understand the world, but the most interesting things don’t fit into boxes. We try to put each other into boxes all the time, and that tends to be the quickest way to division—to send somebody else outside of my group. And over the last couple of years, we’ve gotten to know several astronauts really well and hear their stories about being up in space and looking back at the earth. For each of them, that triggered almost spiritual kind of reactions, where they saw with their own eyes the fact that the world is floating there down below them. But it’s actually just in space. We are floating through space, and we’re all on the same rock floating through space.

And if they can somehow share that perspective with people back on the ground, what might that perspective do to the conversations we’re having back on the ground, and I think to recognize that, to actually see that with your eyes, like, oh wow. All of those boundaries we’ve created, they don’t actually exist in nature. What might the world look like if we’re able to hold that perspective? And again, being transcendent of either, or how do you open up until you realize that it’s both and then hold that third perspective and say, “Given [that] both of these things are true, how do we reconcile? How do we create—flourishing as much life on the planet, both human and non-human?” It’s on an album. You can listen. Have you heard the album yet? I’m so proud of it. It’ll say that. I think it’s good. I listen to it all the time. I love it so much. Anyone who wants to hear it, I’m so excited for them, too.