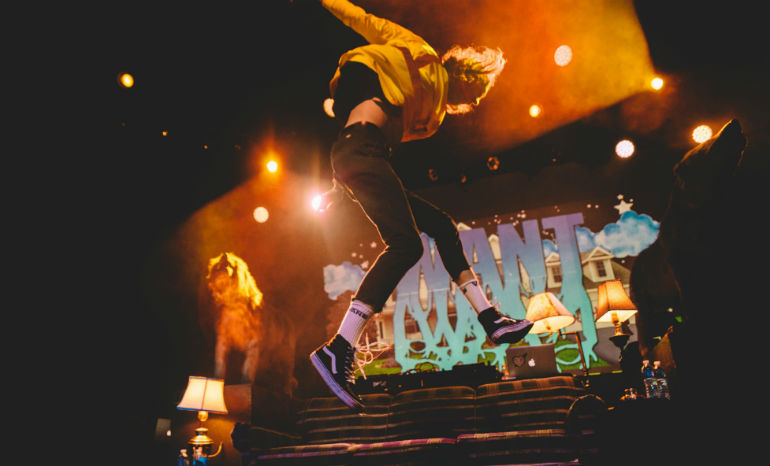 The year is 2008 and we’re all dancing around our rooms blasting “DONTTRUSTME” by electro-pop duo 3OH!3. It didn’t matter who you were, what you looked like, or how old you were, we were ALL massive fans of 3OH!3’s sophomore album, WANT! Fast forward ten years, Nathanial Motte and Sean Foreman, have had countless RIAA certifications, albums, hit singles, and more.

This year marked the tenth anniversary of the iconic album, so of course, the duo had to bring the full album to the fans once again by bringing it out on tour. 3OH!3 is currently out on the road with friends Emo Nite LA and lil aaron to play WANT from start to finish, along with some other hits, calling it the WANT House Party Tour. Last week, we stopped by the sold-out NYC show to see if it was really a house party. This was more than a house party— it was like an emo celebration in honor of the last ten years for 3OH!3 and all 1,200 fans in the crowd.

After the show, we were able to catch up with Nathanial, A.K.A. Nat, about the last 10 years, WANT, the tour life and more!

Can you believe it’s been 10 years since WANT?

What do you think has changed the most for you guys since the release?

We’ve obviously gotten older, but besides the passing of time, I’m more struck by the things that persist and the similarities between now and then. We still concentrate on having fun with our music all throughout our operation, from writing new music to playing shows, just like we’ve done since we started making music! Making people feel included in our process and our music is the most important thing for us.

You’re currently out on the 10-year anniversary tour for WANT with Emo Nite LA and lil aaron. How’s tour going so far? It seems like a literal giant, touring house party.

It’s exactly that—we went out with the idea of transforming these venues into house parties, and I think it’s been wonderfully successful. Our goal, with Emo Nite, was to create a really inclusive and fun evening for people. Our shows are never pure “performances” per se. They are more “parties,” but we really elaborated on that ethos with this tour, and it’s been so great. I think people have had a lot of fun at the shows, and it’s been awesome to have people up on stage with us and feel like we’re at one big house party.

So this summer was the last Warped Tour. You guys were pretty much vets of the tour. How did it feel playing the last year?

It was a great tour! Warped has always been so great for us. Kevin Lyman put us on the tour in 2008 when we were relatively unknown, and it provided us with a perfect springboard for our music. We learned so much on Warped, and played so many great shows over the years. This year was no different. The shows were KILLER—big crowds ready to have fun and dance, with the extra impetus of being the “last year” of Warped. It was epic!

A surprising fact I learned was that you guys have written and produced songs for artists like Ariana Grande, Lil Jon, MAX and Maroon 5. What got you guys into that side of the industry?

We are indeed very active in writing and producing for other artists and other projects. We’ve always produced and written our own music, and back in 2011, our manager at the time and our current publisher started really encouraging us to expand and work on external projects. It was really fun for us and we gravitated to it. Working for other artists allows you to do things that you wouldn’t do on your own artistry, and it can be so gratifying to help someone else make something that they like and something that they feel akin to. We do everything from making music for films and video games to writing with other songwriters in hopes of “placing” a fully-done song with an artist, to writing with artists themselves for their own artistry. Honestly, it has been the lion’s share of what we’ve been working on over the past few years.

What can we expect from you guys after this tour is over?

We’re looking forward to a bit of time off with our loved ones over the holidays. It’s been a busy year between Warped and this WANT tour, and it’ll be nice to decompress and visit the normal world again! We have a bunch of new songs for 3OH!3 in the bag, and we’re always creating and tinkering with stuff. This year, we wanted to focus on the 10-year anniversary of WANT, and not jam new music down peoples’ ears, but rather celebrate that record and that time and place. Next year, I’m sure we’ll look for fun and creative ways to release some new stuff!

One thought on “An Inside Look at WANT with 3OH!3”