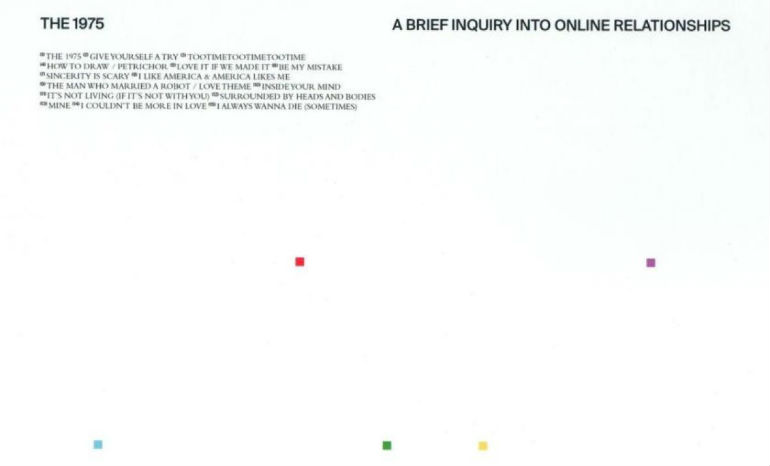 The 1975‘s new era is in full swing now that their LP A Brief Inquiry Into Online Relationships has been released. The band’s third LP is a follow-up to the 2016 hit “I like it when you sleep, for you are so beautiful yet so unaware of It.” Since the album’s release on November 30, 2018, it’s already received incredible praise from fans all over the world.

In line with the UK rocker’s classic style, the first track on the album is simply titled “The 1975,” as it has been on the band’s two previous LPs. Listening to the album the whole way through for the first time without shuffle, sends your ears and mind on a trip. From all of the beautiful sounds and harmonies mixing together, it’s clear that this is the way the album was intended to be listened to.

One song that stuck out to me, in particular, was “Be My Mistake.” Although it’s not one of the album’s singles, the slow song will have you feeling all sorts of things you haven’t felt in such a long time. Matty Healy sat down with Pitchfork and spoke about this song, specifically.

“‘Be My Mistake’ is just about guilt. It’s about when you are a young person and you struggle sometimes to figure out what you really want. And sometimes, like a lot of things, it requires you to make a mistake before you actually understand what you have. And then maybe you push people away, and then you realize that the idea of a casual relationship with somebody is just not really something that you want.”

The beautiful acoustic song is one of those that’ll send you into deep thought. The limited noise gives you a chance to truly hear the song, to hear the guilt in Matty Healy’s voice, and to think of your own guilt in relationships.

The 1975 has also explored new genres on this album. The spoken word track, “The Man Who Married A Robot/Love Theme,” shows the band branching out and exploring different ideas. The track is recited by British Male Siri and follows the life of @SnowflakeSmasher86, a lonely man with an internet addiction, who eventually falls in love with the Internet. This track really speaks volumes on the society we live in, and sadly, we can all relate to @SnowflakeSmasher86 in one way or another.

Another track people can’t stop talking about is “How To Draw/Petrichor,” which is the LPs 4th track. The song definitely channels a lot of UK garage music vibes and has the familiarity of The 1975’s second LP. However, it still manages to bring about a new, fresh feeling. Again with Pitchfork, Matty dove in, explaining it further.

“There’s an element of a preview in the production, because it’s such a masterpiece by [drummer/producer George Daniel]. At the moment, if we just put out what we have, it would be very left-field. But it’s taking shape. It just didn’t make sense to tour for two years and make one album, being the band I want to be. It’s not how it’s happening now. It’s not how even I consume things: I watch something on Netflix and it’s like, “That was the greatest thing I’ve ever seen. Next?”

Hopefully, this album is a bit of a preview for the band’s fourth LP Notes On A Conditional Form, which is due out in 2019, though we don’t know exactly when. If you haven’t yet listened to A Brief Inquiry Into Online Relationships, though, you’re missing out on a beautifully produced album. Go get on that!