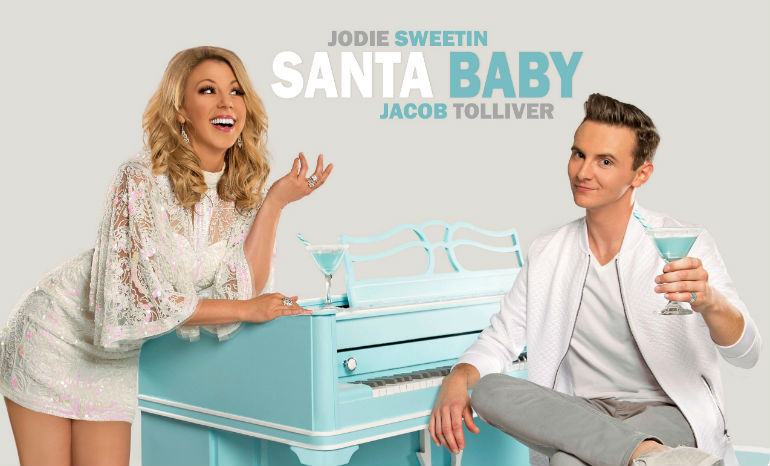 Christmas is coming, people! That means, in addition to shopping for your loved ones like your life depends on it, you should also be listening to Christmas music exclusively for the entire month of December. We know, we know, you’re sick of the same old holiday classics. Well, good news! Fuller House‘s Jodie Sweetin and former American Idol contestant Jacob Tolliver have collaborated on a dazzling new rendition of “Santa Baby” and we can’t stop listening!

Before you hit play on this new twist of an old Christmas fave, we got the chance to speak with Jodie and Jacob all about the cover, what inspired it, and what brought them together in the first place (aside from holiday cheer, of course). Plus, Jodie dropped some hints about whether or not we can expect more music from her in the future! Check out the full interview here:

Hi Jodie! Hi Jacob! Thanks for taking the time to answer some of our questions. To start, there are SO many classic Christmas songs that you could’ve recreated and put your own spin on. What drew you to “Santa Baby” specifically?

Jacob: I was so excited when the opportunity came about for Jodie and I to collaborate. I had to think long and hard about what song would be the perfect fit for us. When “Santa Baby” popped into my head, I knew instantly it was a perfect fit. The doo-wop progression of this song lends itself perfectly to blending our styles in the way we envisioned.

Jodie: “Santa Baby” was something that both Jacob and I thought we could have some fun with, that would be able to incorporate some of his more rock ‘n’ roll-type piano and a more modern sound for my voice! It’s such a fun song and it has a more jazzy feel. We knew we could really bring it to life.

So, we know you’ve been super busy working on Fuller House over the last several years, and in the show Stephanie is actually a musician. Did your character serve as inspiration to you to branch out a bit and make your own rendition of this classic Christmas song?

Jodie: I’ve always loved music and singing, so it’s been fantastic to be able to bring that into my character on Fuller House. Although, I wish I could actually play guitar! Since singing on the show, I’ve been trying to branch out a bit more with music, so this was my first song outside of singing for the show. Maybe there’ll be more!

How did you two link up and decide to collaborate? Was there a lightbulb moment when you decided, ‘alright, we’re going to do a Christmas song?’ Did you instantly agree on “Santa Baby” or was there some debating about which song you should tackle?

Jacob: We met through a mutual friend. Our friend Jeff Franklin hosts these awesome jam nights at his house where people get up to sing, play and just do their thing. Jodie and I started performing some duets at the parties just for fun and they would almost always go over well. So eventually I thought, “What the heck? We should put something out!”

Jodie: Jacob and I had been talking about recording something together for a while. We knew there were so many great songs out there at the holidays that we would be able to find something that would be fun for both of us. We had tossed a few ideas around of songs we wanted to do, but when we listened to this particular song, we knew it was the right fit.

Aside from the holidays being right around the corner, what else inspired you to do a Christmas song?

Jodie: We knew that everyone loves to listen to holiday music and that we would have some fantastic opportunities to get a Christmas song out there. It’s much easier for people to listen and get excited about a song they already know, so doing such a well-known song was a great way for us to get it out there!

Jacob: Last Christmas season was when I came up with the idea. Naturally, Christmas music was in my head and I was in the holiday spirit. Aside from that, I think some of the best duets in history have been Christmas songs. It’s a great way to bring people together.

Jacob, as an emerging rock n’ roll singer, what was it like working on a more pop-based Christmas song? Was it challenging in some ways because it’s different than what you’d typically do?

Jacob: Recording a pop song wasn’t as hard as I thought it would be. It was certainly a bit foreign to start with though. I’m used to recording a song with a band where everyone is playing live and you don’t stop until you nail a take. This was a little different. For a pop song it’s more computer-based. But overall there were the same principles — make a good song!

And speaking of playing live, you also had the opportunity to open up for rock ‘n’ roll legend Jerry Lee Lewis last month on November 17. What was that like?

Jacob: Jerry Lee and his family have become really close to me over the last five years. They’ve truly become like family to me. They are wonderful, down-to-earth people and I love them to death! But still, it’s an absolutely surreal experience every time I get the opportunity to open the show for Jerry. It’s literally a dream come true! This particular performance was extra special though because it fell on my birthday. If you would’ve told me this 10 years ago, I’d say you were lying.

And Jodie, you have a ton going on also! in addition to this collaboration, season four of Fuller House comes out on December 14, so congratulations on that! Then, the following day you have a Hallmark movie coming out called Entertaining Christmas. We’re just going to take a wild guess and say you’re a pretty big fan of the holiday season. What are you looking forward to most?

Jodie: This is the time of year that I really enjoy spending time with friends and family, even more so than usual! So I’m looking forward to time with my daughters, taking a trip to the snow and taking some time to slow down and relax a little at the end of the year.

The best part of being home ❤️❤️

Any chance you’ll ever take some time out of your already packed acting schedule to focus solely on music? Or do you feel that acting just has a bigger part of your heart and you’ll mostly stick to that?

Jodie: Thank you! I think acting will always be my main focus and first love, but I love the opportunities to incorporate my singing in wherever I can!

Last, but certainly not least, a lot of musicians will say that working on one collaboration will often lead to working on others because, when you work with someone else, you sort of snowball (no pun intended) ideas around with each other. Do you guys think that this project did that for you? Do you think you’ll work together on more music in the future?

Jacob: That’s a great question! I think only time will tell. What I do know is that we had a blast creating “Santa Baby” together and it’s been receiving great reviews so far… so you never know!

Jodie: We just might! Jacob and I always have fun together and it makes it much easier to work with someone you enjoy! So, we’ll see what 2019 brings!