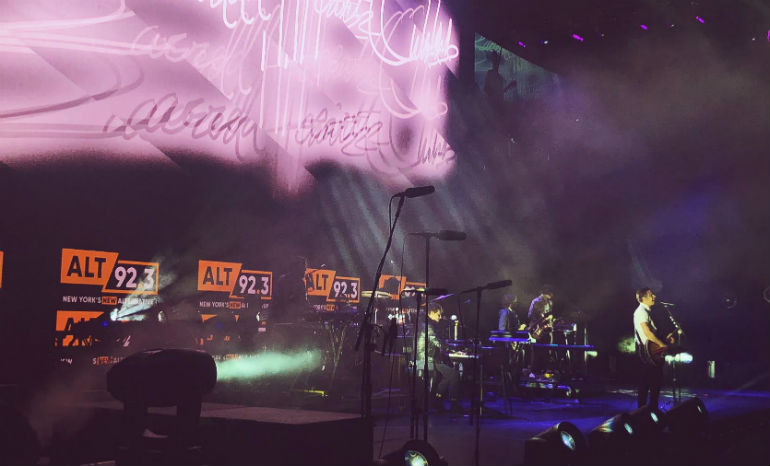 ICYMI, Barclays Center just hosted the newly resurrected New York alternative radio station Alt. 92.3’s first annual holiday show, “Not So Silent Night.” After attending for ourselves, we can confidently say that the show definitely lived up to its name. The event showcased bands that the station has been playing in heavy rotation over the past several months. The eight acts included AJR, Mike Shinoda, CHVRCHES, Bastille, Death Cab For Cutie, Foster The People, with Florence + The Machine and Muse filling the headliner slots.

Brothers Adam, Jack, and Ryan Met, who make up the trio AJR, opened up the night as the crowd slowly rolled in. They set the energy level extremely high for the rest of the acts during their fifteen minute set, in which they played three of their most up-beat songs. the brothers ended with their new hit “Burn The House Down,” which is about the importance of speaking up about what goes on in news and politics instead of keeping quiet about really important issues.

The devil works hard, but the stage crew at Barclays Center on Thursday night worked harder. After each group, the large screen on the stage would rise and middle of the stage would rotate out each band’s equipment. This made the transition between bands last only three minutes, which kept the audience from losing interest.

Following AJR was CHVRCHES. Lead singer Lauren Mayberry was rocking bright blue makeup and a dress that looked like it came right off of a little girl’s doll. The group busted through five songs in their 20-minute time slot, wasting no time at all. “Get Out” and “Miracle” were just two of the five electronic-pop songs that the group performed.

After CHVRCHES came Mike Shinoda, a member of the Rock group Linkin Park. Mike hyped the crowd up like no other. During his set, he paid tribute to his former band member, the late Chester Bennington. He sang Chester’s part from “In The End” in his honor. During the tribute, the entire arena joined in unison and waved their flashlights on their phones back and forth while singing the lyrics. It was a truly beautiful tribute to a music legend.

Bastille — the group that recently collaborated with Marshmello on their single “Happier” — was next to hit the stage. The band kept the crowd energized when frontman Dan went through the crowd on the floor, stopping to sing in certain sections with thousands of fans surrounding him.

Our personal favorite of the night, Foster The People, followed shortly after Bastille. They brought the crowd down to their level, which boasts a more chill and relaxed vibe. Mark Foster and the rest of the crew’s set included their fan favorite, “Lotus Eater,” along with their new single, “Worst Nites.” And let’s be real… would it really be a Foster set if “Pumped Up Kicks” wasn’t on the set list?!

Next was Death Cab for Cutie, who kicked their set off with their most popular song, “I Will Possess Your Heart.” The song has an instrumental intro that last almost five minutes, and while that may sound a little, well, boring, trust us… it wasn’t. The bulk of their music was popular over a decade ago, so it was so surreal to see that the crowd remembered the lyrics.

Following Death Cab’s performance came the first headliner of the night, Florence + The Machine. Florence practically floated across the stage barefoot in her light green dress like a true goddess. Her live vocals — dare we say — are better than her recorded vocals. Her set included fan favorites like “Dog Days Are Over” and “What Kind of Man.” She even climbed onto the barricade on the floor, stood up on it, and held fans hands to keep herself stable. All the while, she was belting her heart out, and we seriously don’t know if we’ve ever been more impressed.

Last, but certainly not least, was classic English rock band Muse to close out the show. Their hour-long set of their classics from the past decade was just what the crowd needed to finish their concert high. The members came out in futuristic jackets, glasses, and guitars that all lit up in bright colors. Muse knew how to command the crowd, making sure everyone sang along to their songs, some of which included “Madness,” “Supermassive Black Hole,” and of course, “Uprising.”

Props to the crew at Alt. 92.3 for putting such a solid lineup together after only being back on the radio for two years! The turn out in the arena just goes to show that alternative is back and here to stay. Any guesses as to who will be on next year’s lineup? Maybe Panic! At The Disco or The 1975? Guess we’ll just have to wait and see!