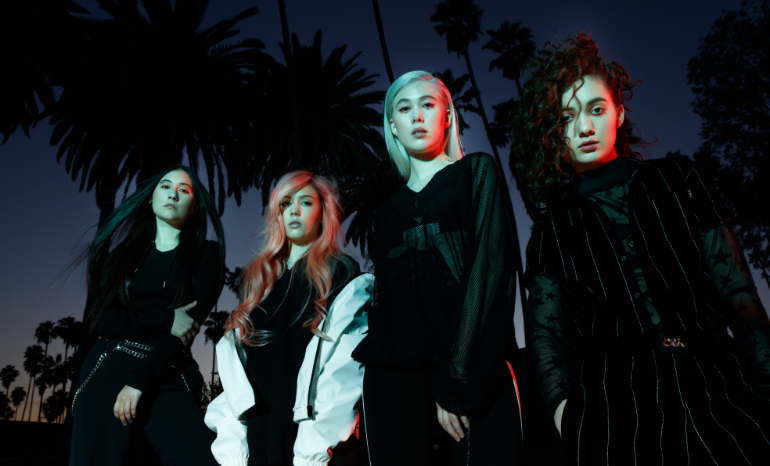 If you’re unfamiliar with the four-piece sister band Crimson Apple, allow us to introduce you. Crimson Apple is made up of Colby, Shelby, Carthi, and Faith Benson. As if being in a band with your sisters wasn’t cool enough, the ladies just dropped their new single, “Can’t Get Out of Bed.” Lucky for us, we had the chance to chat with them about the single and learn even more about their awesome band and how it came about! Take a look:

Let’s jump right in, shall we? You recently released your new single, “Can’t Get Out of Bed,” along with its video. Tell us a little bit about the track and the concept behind the video.

“Can’t Get Out of Bed” was inspired by our lead singer’s personal experience with depression. The song is about struggling with depression and trying to explain it to the people in your life who don’t understand it. We really wanted to contrast the darker message with an upbeat, pop arrangement.

For the music video, we designed it to be a metaphor for both the meaning of the song and our concept as a band. While watching the video, you’ll see that we’re in a beautiful white house, but as the story unfolds, you see us trying to escape. In the first metaphor, the house represents the mind and depression as a “cage” we’re trying to escape from. At the same time, we wanted to express that as beautiful as it may seem on the outside, you never know what someone’s going through on the inside.

For the second metaphor, the white house represents “paradise.” It parallels the story of us growing up in the paradise of Hawaii, but aspiring for more and leaving our home behind.

How does “Can’t Get Out of Bed” differ from your album, Hello, released in 2015? In other words, how has your music evolved in the last few years?

“Can’t Get Out of Bed” is definitely a departure from our debut album. When we released Hello, we were all still kids living in Hawaii and the music was really a representation of our initial learning and growth period as musicians. Since then, we’ve experienced a lot with the move to LA and trying to make it in this crazy music industry. We feel like we’ve grown a lot, not only as musicians, but also as people. We have new perspectives when writing lyrics and arranging music. Hello had a very pop-rock sound, but we’ve definitely moved into a more dark, cinematic pop-alternative sound.

As a band made up of four sisters, how does the creative process work for you? Do you find that you write lyrics well together or separately? What about song melodies? Are your ideas generally similar to one another or radically different?

For us, the creative process is very collaborative. The song process may vary, but we always come together as a group to write lyrics and melodies. Although we each have our own personalities, we find that we’re always on the same page because we experience everything together as a band and as sisters. It’s very easy to work together because we really understand each other.

You grew up in Hawaii, but made the move to California to pursue music. How has the Hawaiian scene influenced your music?

Hawaii isn’t like any other place we’ve been to. We feel like growing up there gave us a unique upbringing and perspective. Japanese culture is very prevalent there, so we were introduced to a lot of Japanese/Asian music and entertainment that inspired our music.

You’re currently working on a new EP. Can you give us any hints on what we can expect?

No hints! We want it to be a surprise! But we will say that “Can’t Get Out of Bed” is only the beginning!

When you’re not on the road or in the studio, what do you each like to do to unwind? Do any of you have any quirky hobbies?

What do you hope fans or listeners take away from your music?

Our goal with music is to bring people together. We want to give them a sense of hope in knowing that they’re not alone in what they’re feeling.

If you could collaborate with one artist or band, who would it be and why?

We’d definitely love to collaborate with Twenty One Pilots! We really admire them and their music.

You just wrapped the High School Nation Tour. Do you have any other upcoming shows later this year or next year that fans can keep an eye out for?

We have a few dates planned for Downtown Disney on December 15 and January 5 & 12. We also have a few live house shows in the works, so please keep updated with our website or social media!

We’d like to thank everyone who took the time to read this interview! For those of you who are new to Crimson Apple and would like to know more about us, please check out our website www.crimsonappleband.com for more info!

Check out Crimson Apple’s “Can’t Get Out of Bed” song and video HERE: