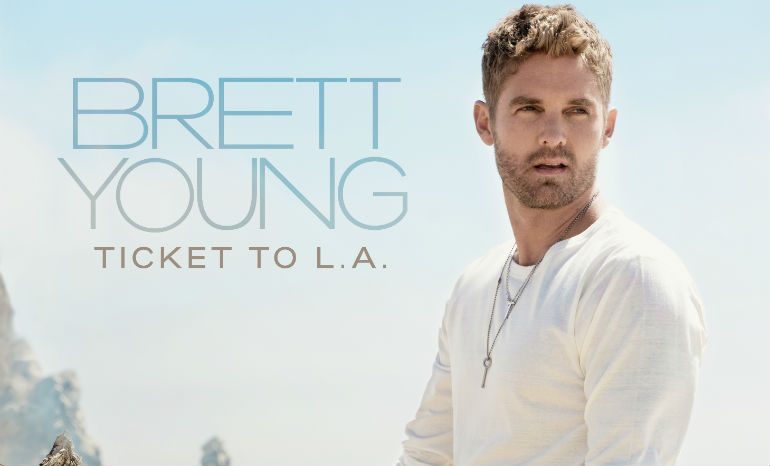 Country singer Brett Young just released his second album titled Ticket To L.A. The album contains a total of 13 tracks, and each one of them contains a beautiful love story, which overall makes for an amazing album that we can’t stop listening to!

The album opens up with the title track “Ticket To L.A.,” which is about Brett intentionally missing his flight to sit at a different gate and talk to a girl whose flight was delayed. Young sings “Now there ain’t a single thing I wouldn’t trade for a ticket to L.A.” We think this song has a very cute message and is the perfect opening song for the album.

The LP also contains songs like “Where You Want Me,” which tells a story about a girl that messes with Brett’s head by telling him all the things he wants to hear. The song is about a lover who plays love like a game with lyrics like “You got me where you want me, but, baby, you don’t want me no more.” Overall, we really enjoy the vibe of this song and think a lot of people can relate to it.

The song “Chapters” is a collaboration with Gavin DeGraw and tells a story of Brett’s childhood. Young recalls a time when he played baseball as a child and how much he looked up to his father during that time. The track goes into detail about how life isn’t always perfect and talks about how he had an issue that caused him to no longer be able to play baseball. This song is about not taking life for granted, using every situation as a lesson learned, and moving forward.

The album closes out with a bit of a sadder track titled “Don’t Wanna Write This Song.” The song is about a lover dying and the difficulties that come with accepting that they’re gone. The song is about a pain worse than heartbreak and the struggles of moving forward. The song contains lyrics like, “Maybe the hardest part is we didn’t break this heart // Nobody cheated or lied, I still have to live with goodbye,” which really gives insight into the devastating heartbreak that people in these kinds of situations have to go through.

Overall, we really loved this album and highly recommend you give it a listen. The lyrics in each one of these tracks are so beautifully written and tell really amazing stories about love and heartbreak, so make sure to definitely listen to the album in its entirety. Be sure to let us know which track is your favorite in the comments or tweet us @soundigest!