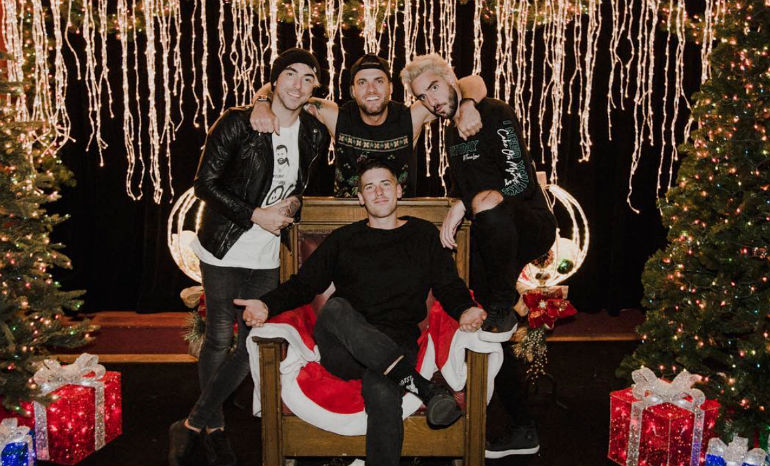 All Time Low ended 2018 in the most festive way. The band played two holiday shows at House of Blues Chicago on December 21, followed by a Haunted Holidays show at The Rave/Eagles Ballroom in Milwaukee on the following night.

The shows were packed with decades of fans, old and new, and everyone was singing along at the top of their lungs. ATL played a wide array of songs, all the way from “Afterglow” to “Jasey Rae.” Altogether, their set was incredible, and the perfect way to close out what was an amazing year for the band.

If you’ve never been to The Rave, it has a magical feeling to it, especially around the holidays. The venue is covered in Christmas lights and decorations, making it into the winter wonderland concert setting of your dreams. There were Christmas trees on the stage, and All Time Low’s production made it even better. It was their 17th time playing at the venue, each being even better than the last.

Had an amazing time in Chicago with all of you!! Here are some photos that @ashleyosborn took, and there are more on our FB page. Hope you like them as much as we do (pretty sure you will).

All Time Low played the same set both nights, yet it felt like two completely different shows. The first night in Chicago was completely sold out, so the venue was absolutely packed. It was also surprising that they decided to play House of Blues over a bigger venue, but the intimacy played into the excitement of the crowd. Even in the back of both venues, everyone was having the time of their lives.

For those of you who’ve never seem them perform live, All Time Low has a way of electrifying a crowd with their stage presence and set list. You could hear every single person in the audience singing along, whether it was a song from the band’s first EP or their latest album. Everyone, including the band themselves, were there because they’re passionate about the music.

To kick things off, The Wrecks opened up both shows and The Maine even made an appearance at the Milwaukee show. We know what you’re thinking: whoever decided on that lineup is a genius. Well, you’re not wrong! All of the aforementioned bands have an incredible stage presence, and between them all, they were able to successfully pump up the crowd.

These final two shows of 2019 were definitely ones to remember, and it’s hard to imagine a better way of ending the year. Hopefully next year starts the way this one ended — with some more epic All Time Low concerts! We know we’ll be there… will you?