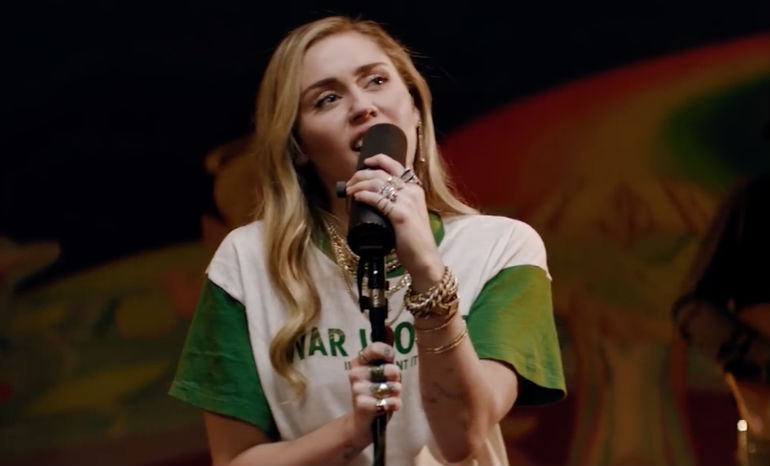 Just in time for Christmas, Miley Cyrus teamed up with her “Nothing Breaks Like A Heart” partner Mark Ronson to cover John Lennon‘s “Happy Xmas (War Is Over).” The pair also collaborated with Lennon and Yoko Ono‘s son, Sean Ono Lennon as well.

The trio debuted this updated version of Lennon’s “Happy Xmas (War Is Over)” on Saturday Night Live on December 15. What makes this song so special is the involvement of Sean Ono Lennon. “War Is Over” was a special campaign John and Yoko used in December of 1969 as a movement opposing America’s involvement in the Vietnam War. Since its release in the late ’60s, it’s become a Christmas classic, celebrating peace and togetherness.

VEVO released the exclusive music video, which was shot at the iconic Electric Lady Studios in New York City. The video is paired down and intimate, showcasing the performers and their instruments. Miley’s vocals on this track truly shine. It’s an impassioned update that will absolutely become a favorite for first time listeners as well as fans of the original.

In the video, Miley and Sean Ono Lennon connect eyes while she belts out the infamous lyrics. There’s a beautiful simplicity to the video that echoes the songs integrity. Unlike most Christmas songs that err on the side of sentimental, “Merry Xmas (War Is Over)” has a bright hopefulness that we all need this time of year. Give the song a listen and decide for yourself, but if you ask us, this new version is sure to become an instant holiday classic. Also, take a listen to the original if you’re unfamiliar.

Whether you prefer the old version to the new one, there’s no denying that what Miley and Mark have done with Sean is really, really cool. We don’t know about you, but we’ll definitely be bumping this today… and maybe even tomorrow, too!