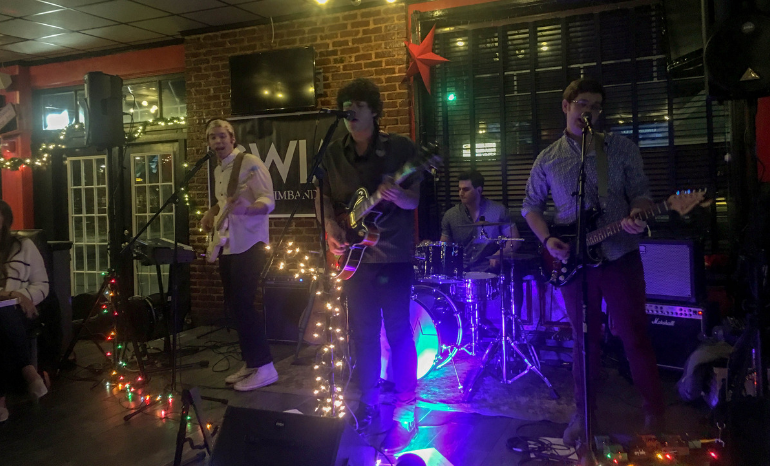 Stony Brook’s the Bench Bar & Grill was packed last Saturday night with SWIM’s closest friends, family, and biggest fans. Over the last few years, what started out as a small high school project among four acquaintances matured into an established indie pop-rock group made up of lifelong friends. SWIM was named one of the Top 10 bands on Long Island and has played notable venues such as the Bitter End in Manhattan, Stephen Talkhouse in the Hamptons and even one of the country’s largest music festivals, South By Southwest in Austin, Texas. This night was a special celebration of the band’s growth as it was their 10th time playing their favorite hometown venue. When frontman Daniel McCaffrey announced the momentous accomplishment, the bar erupted with shouts and applause.

SWIM opened the night with Hozier’s “Someone New.” It was the perfect way to get the audience excited for their set because even people who were unfamiliar with SWIM’s music could sing along. Some other covers included “What I Like About You” by The Romantics, “Castle on a Hill,” by Ed Sheeran, “Last Nite” by The Strokes and a rendition of “Santa Claus is Coming to Town,” because it is the holiday season, after all. The audience clapped and waved their hands along to each and every song. It’s clear that the band carefully picks the setlist with each member’s specific musical talents in mind. At one point, they even sang “Night Changes,” by One Direction, and considering McCaffrey resembles Harry Styles in both looks and vocals, it was a very believable performance.

The night wasn’t all covers. SWIM played plenty of original songs including “Fever,” “Fall into Me,” and fan-favorite, “Heartbeat Connection.” They even sang two unreleased songs that we can hopefully look forward to hearing again in 2019. “Pass By” was written by bassist and keyboardist Patrick Morelli, and the keyboard riff gives us major Coldplay vibes. The other newbie is called “The Chase.” The band uniquely played the track with each member switching positions. Drummer Brian D’Angio was on bass, guitarist Nick Riviezzo was on keys, bassist Patrick Morelli sang and played guitar, and singer Daniel McCaffrey jammed out on the drums. It was very impressive. Not many bands can do that.

After playing a high-energy set for a jam-packed two hours, SWIM began to break down their set, but the audience clearly wanted more. All over the bar you could hear whistles and shouts craving an encore. Half the venue chanted that they wanted to hear “Special,” while the other half tried for “Natural Feeling.” “Special” took the win and SWIM got back on stage accompanied by a sea of applause to perform one final song.

“>Listen to SWIM’s hit single “Heartbeat Connection” below and don’t forget to lookout for new music in the new year. In the meantime, keep up with all of their latest activity through Facebook and Instagram. Who knows, maybe one day they’ll bring their contagious energy to a venue near you.