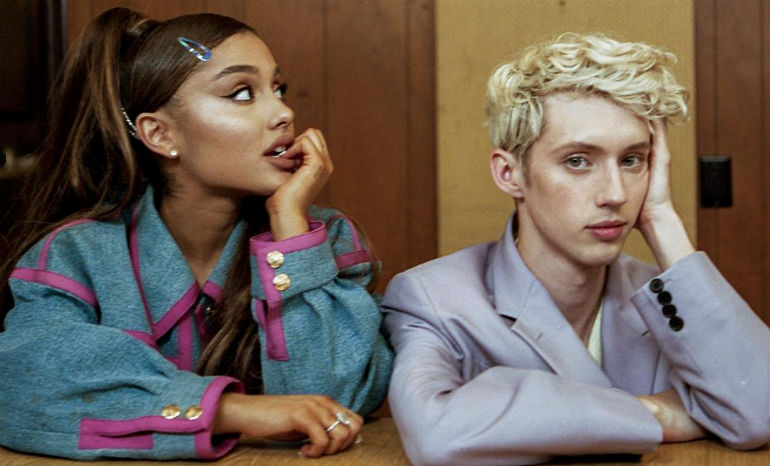 Since it’s New Year’s, now’s the time to reflect back on what an amazing year of music 2018 was! So many artists found great growth this year as they branched out and collaborated with other artists — some even crossed over genres! Acknowledging both up-and-coming artists as well as big wig names, we present to you the top 10 best collaborations of 2018.

BØRNS kicked off 2018 by releasing his sophomore album, Blue Madonna, which features a very successful collaboration with the indie queen herself, Lana Del Rey. The two joined forces on the single “God Save Her Young Blood.” Lana adds a beautiful dynamic to BØRNS’ sound with her soft sultry vocals. The smooth similarities in their work have us wondering if they shared any relation in a past life, or perhaps if they’re sonic soulmates?

Billie Eilish gave her fans exactly what they had been asking for when she collaborated with Khalid in “lovely.” With very similar fanbases, these two created the perfect single that showcases their maturity as they both manage so much fame at such a young age. The single dives into a more taboo topic centered around overcoming depression, and is featured in the popular Netflix show, 13 Reasons Why.

8. “Dance To This” by Troye Sivan (featuring Ariana Grande)

In mid-June, Troye Sivan surprised fans with the mellow, dance-pop anthem “Dance To This,” which features his good friend Ariana Grande. Sivan spontaneously announced the single just three days before the release date via Twitter. With the combination of Grande’s soul and Sivan’s poise, this collaboration was everything fans wanted and more. The music video portrays Sivan and Grande as an awkwardly cute, fictional couple and shows off each artists’ go-to dance moves.

When Kid Cudi and Kanye West join forces, it’s inevitable that you’re going to get deep in your feelings. The two artists found great success with their collaboration “Reborn,” which comes in as track 5 on KIDS SEE GHOSTS. Many fans felt a strong spiritual connection to this song as it reflects on Cudi and West’s controversial past, and guides listeners to the light at the end of every journey. The track flawlessly depicts the emotions of feelings rebirth thanks to the flawless production!

6. “After The Storm” by Kali Uchis (featuring Tyler The Creator & Bootsy Collins)

“After The Storm” is the beautiful jazz-funk love child of Kali Uchis, Tyler, The Creator, and Bootsy Collins. Uchis uses this track to acknowledge the issues that may surround her, but ultimately focuses on the positive because after all, “After the storm is when the flowers bloom.” Collins opens up the track with his upbeat introduction that sets the mood. About halfway through the track, Tyler jumps in  with his verse that brilliantly fits into the cool aesthetic that Uchis radiates. Although the song addresses dark themes of depression and isolation, Tyler keeps the vibe lighthearted as he notably closes his verse with “The Tito to my Randy, now let’s produce some Thrillers // My chocolate wit’ yo’ vanilla.”

In late September, Logic completed his discography of albums with YSIV, leaving no regrets behind him. After being a fan of Wu-Tang Clan for a majority of his lifetime, he fulfilled his dreams by collaborating with each member of the Clan (except for Ol’ Dirty Bastard who passed away in 2004). This was a huge moment for Logic and has been a groundbreaking point in his musical career. Logic proves that manifesting your dreams is possible if you’re driven by your passions.

Around the end of May, Mac Miller spontaneously dropped “Small Worlds” as a single that would soon foreshadow his highly anticipated album Swimming. However, many may not know that John Mayer added his legendary guitar skills on this track! As Mac explored more jazzy tones that fell outside of his usual sound, Mayer helped polish things off to create the masterpiece that is “Small Worlds.”

Mayer said on Instagram, “I didn’t expect to play on his album the day he played some songs for me at his house, but when I heard ‘Small Worlds,’ I gave it a short, chirpy little ‘yup,’ which is the highest praise I can give a track. It means we don’t need to say another word, it’s going down. I grabbed the nearest guitar in the room and within a couple of hours we had finished a tune that made me so incredibly happy to have a part in, not to mention we established a nice little friendship.”

Lady Gaga and Bradley Cooper collaborated by mixing their respective fields to create the beautiful film A Star Is Born. “Shallow” is currently marked as one of the most successful songs on the soundtrack. It perfectly depicts what it’s like to dive headfirst into love without a safety net. Not only is “Shallow” strategically produced, but we’re all still shook that Bradley Cooper can SING! Honestly, if you haven’t seen this film yet, you should consider making it one of your 2019 New Year’s resolutions.

Just when we thought Cardi B couldn’t get any better, she released one of the most iconic songs of 2018 called “I Like It” with the help of Bad Bunny and J Balvin. We absolutely love the way Cardi incorporates bilingualism into her tracks! There’s not much more we can say about this track other than that it’s a TOTAL BOP!

Are you surprised? Are we surprised? Nah. “SICKO MODE” is without a doubt the best collaboration of 2018, which was marked as No. 1 on Billboard‘s Hot 100 this year! Travis Scott is nothing less than a genius when it comes to producing. The rapper somehow managed to take the varying styles of Drake, Big Hawk, and Swae Lee to make flawless transitions that effortlessly flow. Even though we all claim to be excited about the music that’s to come in 2019, we can’t deny that “SICKO MODE” will probably be played at least a thousand more times throughout the new year.