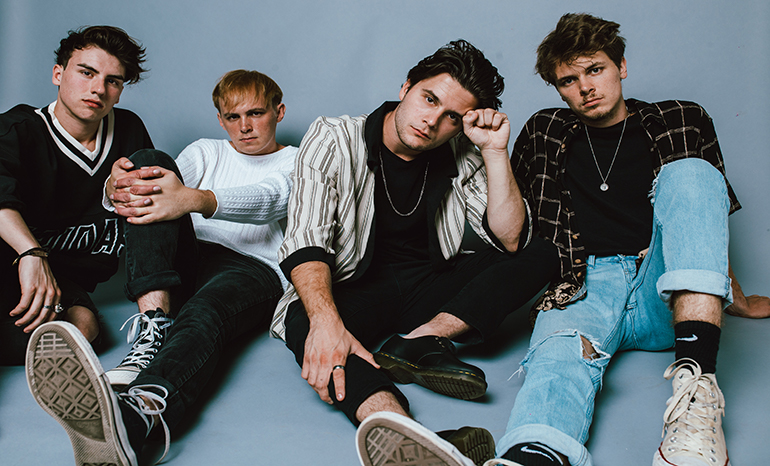 New Jersey alt-rock band The Stolen just finished up an incredible 2018! They wrapped up their extensive U.S. tour. and also released their latest single “Rooftop” feat. Jake Miller on Revival Recordings in November! This week, we got a chance to talk to about all the details of their year and everything that’s coming next. Check it out!

Thanks so much for speaking with us! You guys have had an awesome year. How was your latest tour? It looks like you brought it all back home with your last show at Asbury Lanes. What’s it like being able to tour the country and bring that experience home to Jersey where it all started?

Our latest tour was a great way to close the year out. We’re at a point now in our career where we’ve covered the whole continental U.S. a few times, so you go back to some of these places after what sometimes feels like treacherous drives to see familiar faces as well as new ones. It’s really cool seeing a tiny empire start to grow in these spots, and then wrapping the very end up in your home state is always a great way to close out. It was also really intriguing to close out at the new Asbury Lanes. We’ve played the old lanes a bunch years ago back when it was more of a DIY punk venue.

Do you have a favorite tour story or any tour horror stories?

There are so many tour stories that are incredible. I feel like every tour something incredible happens so to single out one event is tough. One moment that was extremely heartwarming was the video shoot for “Overboard.” We filmed that video while on tour going through Cleveland. We had fans travel and fly in from around the country to be at the show for the video. We’ve also seen countless fan tattoos, which is extremely wild to think that people would permanently ink their skin with something related to this band let alone as many as there are for a small band like us. As for horror stories, the number of times our old vans have broken down or the time we left a guitar in the U.S. when we were in Canada and had to drive back through the night to Buffalo to get it—those were definitely the worst.

Speaking of shows, how was opening for Jake Miller at his birthday show? It looks like you guys do a lot of work together. How has that process been?

Opening for Jake was a great time. It’s always a pleasure playing together because we’ve known each other for such a long time. It’s always great playing with friends. Any kind of work we’ve done with Jake has come together for that reason first before anything.

Switching it over to your music, your newest song “Rooftop” is not only catchy and interesting, but the subject matter is extremely important in the current time we’re living. With suicide being a large topic in the media, how do you think a song like “Rooftop” helps shine a light on the issue?

Our main goal with “Rooftop” was to make sure we didn’t cheapen an important subject. The message in a song like this is really to always, in any way, look out for each other as humans. It’s very easy to pretend you’re someone you aren’t on the Internet or even in person. Not all cases are so cut and dry, and a lot of times, people hide their feelings because they feel that nobody can relate to them. That was the point of making the song poppy and dancey, to sonically just drive to that illusion that “everything is fine.”

Your songs have an overall pop and 80s vibe. How do you get to that point when writing your songs? What’s the most important thing you want to convey through your music?

Writing for us always needs to just have substance. We love a solid hook and ear candy as much as anyone else, but we’re huge on not sugarcoating a feeling and really capturing what it is we want to say. At the end of the day, even with a pop sound, we want it to have this band feel using real drums and lots of guitar work on top of the 80s nostalgic synths. We love bands like The Police, The Cure, Peter Gabriel, and U2 a lot for that reason. You can definitely hear that influence in our music.

You guys started out with doing AC/DC covers. It sounds like you guys try to incorporate that harder rock edge in some of your tracks. Do you enjoy blending genres to create your tracks?

We started as a cover band so young. We got these influences bestowed upon us from being in the car with our parents as kids. You’d have your Tom Petty and AC/DC and the Rolling Stones, but my dad was also big on a lot of Motown like Sam & Dave and Al Green. Especially on our upcoming record, I think you’ll hear influences from both of these genres. You kind of lose those things and unintentionally put yourself in a box as a teen. We were “Warped Tour kids,” which of course did model our youth, but once we all hit our twenties, we revisited so many artists we truly grew up on and found what made those songs resonate with us even years later.

What’s the best part about being in a band? Is it recording, touring or something else?

The best part about being in a band overall is just creating music and being able to put it out there for the world. I think both touring and recording intertwine in playing a part in that. It’s kind of a general answer, but the most rewarding feeling is taking something you’ve created with your best friends and being able to share that with the world. Whether it’s joy or conviction or whatever that feeling is, you’re putting yourself out there.

Where does your band name come from?

The SparkNotes version of this story is that we were a cover band at the time. We were 10 to 13 years old. We in our own selves still mess this story up but one of our friends apparently got their bike stolen. It was a stupid young kid band name that just became such a part of us and we never changed it. It’s just a part of who we are as people and a band.

Your latest three tracks fit together really well. Can we expect a new project soon with some of these tracks?

Yes! We’re just finishing up our debut full-length record set to come out in 2019. All of these songs will be a part of that.

I think the Jersey in us says a dream collab would be with Bruce Springsteen. It’s amazing how an artist like him has created albums like Born to Run, which had some roots R&B Motown influence on rock, to a lot of Americana bluesy records, to even a lot of 80s synth work all over a record like Born in the USA. There are songs you’d hear at an 80s prom or songs you’d hear in a dusty road scene in a movie. Lyrically, he’s always telling a story with a preach to the choir chorus even when the verses can be very metaphorical.

And finally, is there anything else you’d like to add?

We just want to thank everyone who’s supported us in any aspect thus far and to be on the lookout for our debut LP this spring.

Make sure to check out “Rooftop” featuring Jake Miller below, and follow The Stolen for new music in 2019!