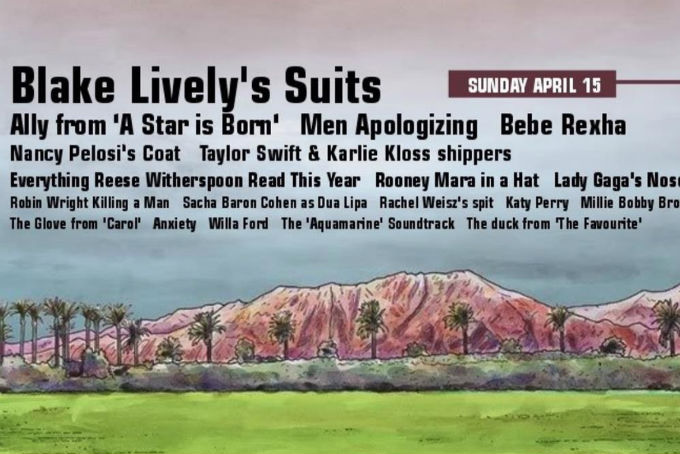 Coachella dropped its lineup this week, and the internet was HERE for it. The lineup includes record breaking artists like Ariana Grande, who’s the youngest Coachella headliner ever. Breakout K-pop group BLACKPINK will make their first ever live U.S. debut at the festival as well. There’s no question about it — Coachella is going to be incredible this year, but as always, the Internet had a couple of things to say about this year’s roster. Check out some of the funniest fake Coachella Lineups below!

This first meme was filled with the pop culture references we deserve to see on stage, including but not limited to “Sandra Bullock in a Blindfold,” “iCarly in Brazil,” “Nancy Pelosi‘s coat” and just “anxiety.”

It’s no secret that Wendy’s dominated the Twitter game, so of course fans of the fast food chain jumped in to make a lineup dedicated to the fresh, never frozen restaurant.

Here’s a lineup that all of Gen-Z would love to see IRL. Every artist from the best era of Disney Channel? Count us in!

Even Netflix got in on the joke for all the die-hard Queer Eye fans out there.

This lineup has a refreshing mix of acts for everyone. From diverse headliners to entertainment icons of the past, this is a Coachella we can allll get behind.

still can't get over this coachella lineup 😩🙌 pic.twitter.com/FiT652SchT

I think that the Bee Movie DJ set followed by your beloved third grade teacher is a mix that we can get down to. Other shoutouts go to Joe Biden, Bob Saget, Smash Mouth and One Direction.

yo this coachella 2017 lineup is fuckin out of control damn pic.twitter.com/woLmTVjyZv

And last, but not least, a lineup featuring all of the best vine stars. We would pay real money to see these people on stage, and TBH, we can’t wait to rave to the “Dropped My Croissant” remix.

why is everyone complaining about the coachella lineup this year? pic.twitter.com/rgkS1eFK3D

In all seriousness though, the this year’s Coachella lineup is top-notch. Let us know what your dream lineup would be and who needs to be on stage at the festival next year in the comments below, or on Twitter @soundigest.