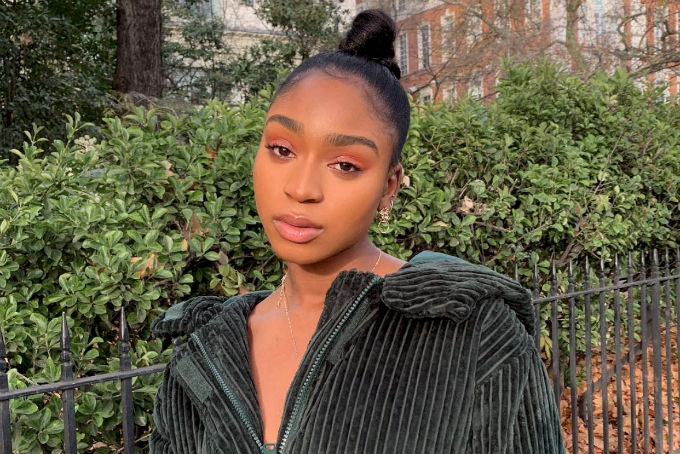 Normani is having a great start to her solo career. Her collaboration with Khalid, titled “Love Lies,” peaked at No. 9 on the Billboard Hot 100 in 2018. She also released a track with 6LACK called “Waves,” a couple of songs with Calvin Harris, and most recently she dropped a new collaboration with Sam Smith titled “Dancing with a Stranger.” The 22-year-old will also open for Ariana Grande on her Sweetener World Tour later this year.

I was never amazing at keeping these kinds of secrets but thank you GOD ♥️ Dancing With A Stranger is finally YOURS! I live for you more @samsmith! Thank you for trusting in my ability to take this beautiful masterpiece home. I love you soooooooooo much. Y’all I have a song with a whole legend. What is lifeeee

Despite her success as a solo star, Normani is looking back and opening up about some of her not-so-wonderful memories as a former member of Fifth Harmony. In her recent interview with Billboard, for example, she revealed that she was the only member of the group who was delegated to singing background vocals. A prime example was in their song, “No Way.” She told the mag that she cried during the recording sessions and struggled with the idea that this might be happening to her because of her skin color.

“It was a ­subconscious thing. You think, ‘Why am I the least-followed in the group?’ Even if you don’t recognize that you’re paying close attention to it, it takes a toll on your confidence. You worry — is it me? Is it because I’m black? Or am I just not talented?”

Back in 2016, the singer also received death threats, racial slurs, and images of her face photoshopped onto lynching victims amidst what was deemed “drama” between her and bandmate Camila Cabello. Normani had done an interview on Facebook Live and called Cabello “quirky.” Camila’s fans then decided that Normani was “shading” her bandmate and proceeded to cyberbully her, even though this was strongly discouraged by the “Havana” crooner herself.

Normani also told Billboard that the other members of the group all tried to offer their support, but ultimately couldn’t relate to what she was experiencing.

“They tried to be there for me as best as they could. But I don’t think they had the tools that they needed, because it’s not their experience. I can give them credit for trying to be there for me, but at the same time… The girls don’t experience things the way I did.”

Nowadays, though, Normani’s put that all behind her. These days, she’s aiming to use her skin color to her advantage in the music industry.

“There’s a responsibility I have as a black woman — one of the very few to have the power to kill it,” she says. “Even in the mainstream, there’s not many of us. Especially ­chocolate girls. Like, being African-American is one thing, but girls [with] my complexion. It’s unheard of. It’s me and SZA. Who else?”

Also in the “Love Lies” singer’s favor is the fact that she’s much stronger and confident in herself and her talent that she’s ever been before.

She said, “I’m actually capable and strong enough to do this on my own. Not as Normani in the entity of Fifth Harmony, but as ­someone who is a totally separate and ­different person: Normani.”

Plus, if you thought there was any lingering drama between her and Camila, think again. Normani couldn’t be more proud of everything the “Never Be The Same” singer has accomplished — particularly her recent Grammy nod.

“This is my time. Just like [Cabello] had an amazing run. I am so proud of everything that she’s doing. She’s nominated for a freaking Grammy! Like, that is amazing. And all from what girl group? Fifth Harmony. Like, that sh*t’s fire. And I know that all of us are more than capable of doing that. I’ve come to believe that I am that talented. Before, I didn’t wholeheartedly believe that.”