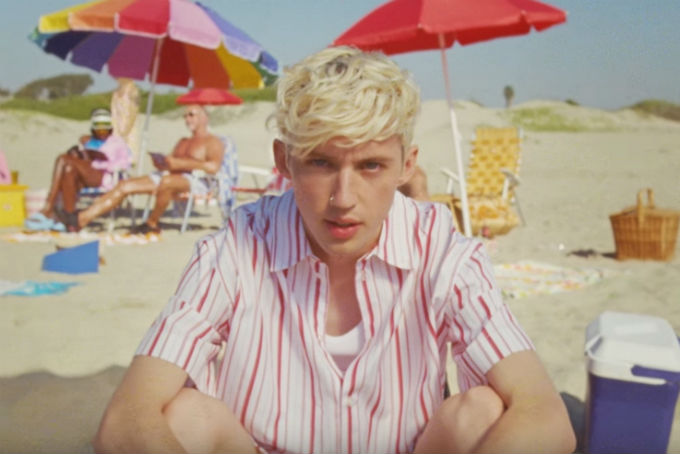 Troye Sivan is back with another music video, and this time, it’s for the fan favorite song, “Lucky Strike” from his sophomore album Bloom. “Lucky Strike” is a beachside romantic love story, giving us the perfect taste of summer in the dead of winter. It’s just what we needed, honestly.

Truly a blessing. THANK YOU for the love bts from LUCKY STRIKE photos by @mattypcock

The video starts off with Troye sitting on a crowded beach, with colorful beachgoers, when he spots a cute bartender. He shares glances with him as the video cuts to scenes of them frolicking in the ocean. The video then returns to the present moment where Sivan’s crush heightens and the singer finally goes to order “just…whatever,” from the beachside bar. Among the ingredients of the cocktail, it appears Troye’s own heart is playfully squeezed into the cherry-colored concoction. Throughout the rest of the video, the bartender squeezes Troye’s bloody heart as the two set aside and go on a romantic boat adventure in sparkly red water.

Recently, Sivan was up for Best Original Song at the Golden Globes for his Boy Erased soundtrack contribution “Revelation.”

He also recently released the song “1999” with Charli XCX, which later got its own hyper-nostalgic video. Besides his own work, he made an appearance in Ariana Grande’s viral video for “thank u, next.”

He’s currently about to embark on his Bloom tour across Europe, Asia, and South America. Check out the “Lucky Strike” video below as well as some behind the scenes footage!