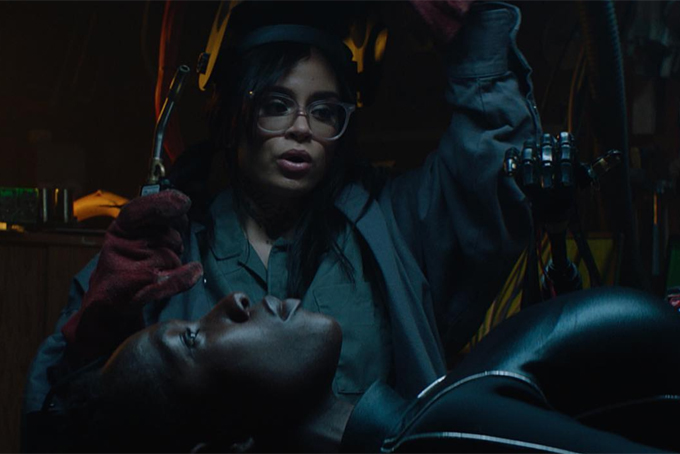 Kehlani waxes nostalgic over an old flame in “Nights Like This,” contemplating reaching out to an ex she knows will just play with her feelings. The song is also her first collaboration with Ty Dolla $ign, despite the fact that they’ve made songs together before that haven’t been released.

The 23-year-old singer-songwriter told Zane Lowe, “We’ve made songs and it just hasn’t come out because it hasn’t been the time… This was just the perfect time for us both to finally put something out.”

The infectiousness of this pop/R&B jam has given the “Honey” singer her first top 10 record.

Also, the music video for the song serves major Ex Machina and Black Mirror vibes, as we see Kehlani connecting with an android only to be destroyed by it. This isn’t a cybernetic romance, however; Kehlani debunked a fan theory that she was building her own lover, saying on Twitter, “i was just being nice.”

After an android collapses on her doorstep, the singer rebuilds the machine and starts to teach it about friendship. As the robot seems to be learning to love, the video follows a touching arc until we see the android knock Kehlani unconscious and take advantage of her state to upload its own consciousness into her. With a bloody nose, robot Kehlani destroys its former body, knocks out Ty Dolla $ign, and burns the house down before driving away.

Since Kehlani was six months pregnant during the “Nights Like This” shoot, she’s only seen from the waist down, looking like a hot, but nerdy scientist-meets-mechanic. The beautiful and futuristic video surpassed one million views in two days.

“Nights Like This” is the first new music from a new mixtape Kehlani has teased for February. She started working on an album last fall during a burst of creativity tied to her pregnancy, and she explained some of the inspiration for the album to Zane Lowe on his Beats 1 Radio show.

We don’t know about you, but we can’t wait to hear more from this fruitful period of Kehlani’s life.