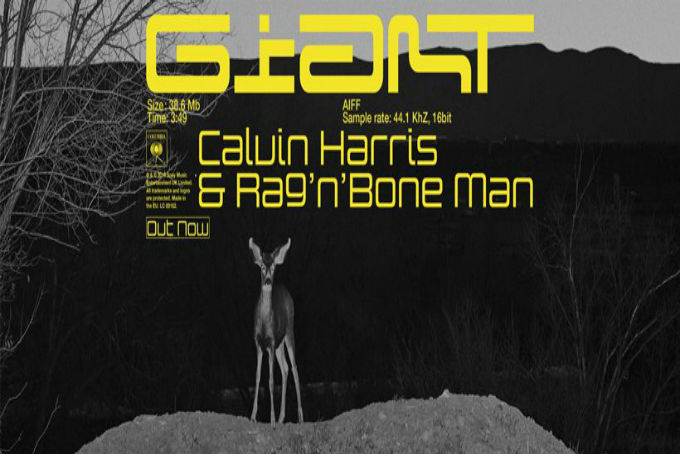 We all know Calvin Harris from his highly impressive résumé of EDM hits over the last decade, including collaborations with Rihanna, Dua Lipa, Florence + the Machine, Sam Smith, and many more. His latest project is with singer-songwriter Rag’n’Bone Man for their single “Giant” that was released last Friday, and we’re loving it!

Rag’n’Bone Man stepped into mainstream music in 2016 with his single “Human” that charted at #5 on the Billboard Hot Rock Songs the following year. He has a beautiful, soul-wrenching deep voice that adds extreme emotion to anything he sings.

“Giant” tells the story of a person who became stronger after a relationship. He was taught life lessons during that time and came out a more confident person. He feels as though the roles are reversed with that person and he wants to help them. Rag’n’Bone Man begins the song with a mellow beat.

He sings, “I understood loneliness before I knew what it was // I saw the pills on the table for your unrequited love // I would be nothing without you holding me up // Now I’m strong enough for both of us.”

When the chorus hits, he’s asking the other person to trust him and see what he sees. That way, they’ll both be happy and comfortable. A piano joins a more intense beat as he sings, “I am the giant // Stand up on my shoulders, tell me what you see // ‘Cause I am the giant // We’ll be breaking boulders underneath our feet.”

The pre-chorus brings in a horn section as the beat continues through the second verse. Rag’n’Bone Man is telling the other person to be honest and open because it helped him, singing, “Don’t hide your emotions, you can throw down your guard // And feed from the notion we can be who we are // You taught me something, yeah, freedom is ours // It was you who taught me living is // Togetherness, togetherness, togetherness.“

The rest of the song is an absolute banger as Harris incorporates a blues chant in the bridge. Many times in dance songs we rarely notice the lyrics, since we’re paying attention to the catchy beat. Rag’n’Bone Man’s soulful voice makes the lyrics stand out and makes us want to listen. Calvin Harris and Rag’n’Bone Man did a wonderful job with this unique dance track, and we hope they work together again in the future!