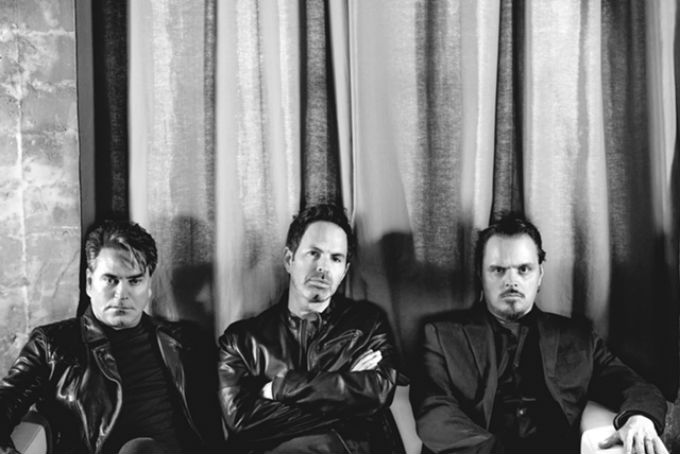 ASHRR is bringing the 80s back into mainstream music! The New Wave/electronic trio is comprised of singer Steven Davis and producers Ethan Allen and Josh Charles. Davis has roots in singer-songwriter and gospel music, Allen is a producer/engineer and a member of indie band Gram Rabbit, and Charles is an acclaimed piano and guitar player as well as a singer and producer. They formed in Los Angeles in 2018 and brought their eclectic musical backgrounds to create their debut EP ASHRR that was just released last month. We recently spoke with the group to talk about influences, songwriting processes, and more. Check it out below!

Steven, Josh, and Ethan, nice to be speaking with you all! You all have had exceptional solo careers. What made you decide to join forces and create ASHRR?

We share a great camaraderie and love of art. We got along so well when we first met up that we decided to try to write some songs together. Those songs came out beyond what we expected, and we decided to make an album. We love the New Wave music of the 80s and the experimental art pop of the late 70s, as well as the electronic alternative rock of now, so it just felt right when we started making music together.

Where did the name ASHRR originate?

STEVEN: I was born with the name of Asher. We morphed the phonetics to ASHRR.

What made you form a New Wave band, considering you all have music backgrounds spanning all different genres like singer-songwriter, pop, and indie rock, just to name a few?

STEVEN: My musical palette and taste is a broad band. Having come from the musical tradition of the big band era, and having written and recorded several albums with Josh Charles in this genre, we wanted to explore and expand our musical expression. After our transitional recording of pop covers from the 80s, Departure, we had the good fortune of meeting up with the multi-talented, Ethan Allen. This was the beginning of the shaping of ASHRR.

Steven, your voice reminds me of a mix between Bastille meets Alex Turner of Arctic Monkeys meets Morten Harket [lead singer of a-ha], none of whom are American. You’re from the Midwest, so I have to ask who your singing influences growing up were?

STEVEN: Well, if I were to drop some names from the likes of Bobby Daren to Sinatra and Bennett, I’d have to admit it’d be a stretch from Arctic Monkeys. I guess it’s an anomaly that a singer would comfortably traverse the distance between such disparate genres, but it’s the journey and exploration of musical expression that keeps it interesting. I’ve listened and learned from the great singers and bands of all styles and genres, spanning from the Beatles, Bowie, Depeche Mode, Pink Floyd, Sting, and Elton John</strong<, to Sinatra.

What was the writing process like on your latest EP ASHRR?

JOSH: Ethan and I would get together and come up with sonic textures, riffs and grooves and start singing nonsense until something arrived. We then all got together and perfected the lyric while Ethan and I made all the music and produced the album.

ASHRR has an eclectic mix of songs including the 80s-inspired synth song “Don’t Wait Too Long,” the pop-rock tune “Artifact,” “Sometimes,” which has a funky bass line, and “Here,” in which Steven’s voice sounds a bit like Frank Sinatra’s! What artists were you listening to when recording and producing this EP?

JOSH: I think we listened to our own ideas more than anything, but I recall some Peter Gabriel “Security” being listened to along with Brian Eno and Talking Heads. We try not to listen to other music when we’re writing our own so that we can focus on the creativity inside each of us.

What message do you hope to send to your listeners through your music?

STEVEN: Music is an expression of the nuance of human experience, often mirroring relationships, love and loss, hope and fear. It can also serve as a barometer of present cultural and political realities in which we are all a participant and witness. The songs we write are commentaries of a range of human emotion and perspectives, from the provocative to the celebration of life and love.

Will you be releasing any full-length projects in the future?

Our debut comes out in May!

What are you most looking forward to for ASHRR in 2019? Any touring in the works?

Touring behind the album and being able to share our music with the world.

Who would you like to collaborate with most on an ASHRR song?

Favorite song on the EP?

Favorite lyric from the EP?

“We make our own history // We’re told our reality // Watch it all fading fast, // All that’s left if paper glass.”

What’s a song you wish you would’ve written?

First album you ever bought?