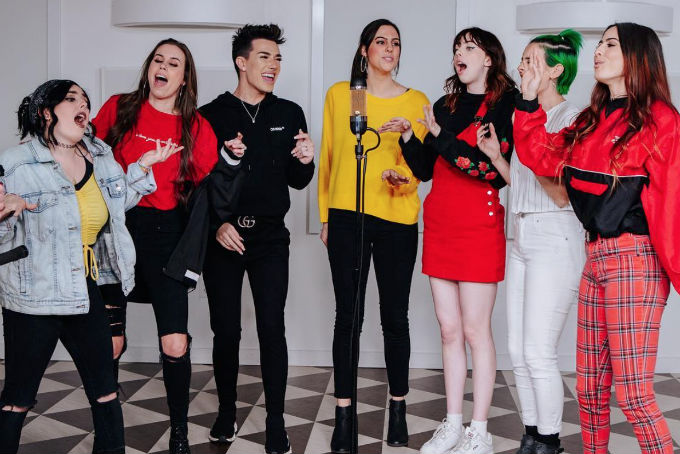 If you stay tuned in to YouTube, you know that, for the most part, James Charles sticks to posting makeup-related videos. What you may not know, however, is that the popular beauty guru has other talents, too, and singing is one of them. Wait, what?

You heard that correctly, folks! The 19-year-old social media star actually has an amazing voice, and just a few days ago he showcased his vocal talents in a video he did with sister band Cimorelli. Together, they performed an acoustic rendition of “Never Enough” from The Greatest Showman, which was originally performed by Loren Allred‘s character in the flick, Jenny Lind.

OUR COLLAB WITH @jamescharles IS FINALLY UP!!!!!!!!!! We covered #NeverEnough from @greatestshowman + we sang a BUNCH of @ddlovato songs in a SISTER SING-OFF on our channel!!!!! 😍 link in our bio! Comment which part was your favorite and make sure you check out both videos!! PS…. the songs are on Spotify/Apple Music too 😁

To be honest, aside from not realizing how great of singer James really is, the collab isn’t all that shocking. We mean, both James and the Cimorelli sisters are extremely famous in the YouTube space, so it makes total sense that they would work on something together. Still, it wasn’t exactly expected, but we’re so glad it happened. Check it out!

The covers didn’t end there, though! The Insta-famous crew dropped another video, which was a medley of Demi Lovato‘s all-time greatest hits. The mashup proves that, not only can James sing, but he’s also a powerhouse vocalist. See?

We don’t know about you, but we’re obsessed with what they’ve dubbed the “Sister Sing-Off,” and we’re only hoping for more musical collabs from them in the future. Great job, sisters!